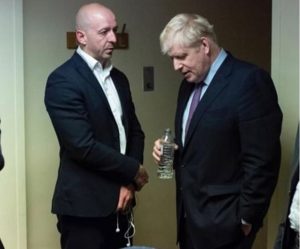 Lee and Cain and Boris Johnson

It’s thought the promotion would solidify a strong Vote Leave team at the top table of Government.

Cain is a close ally of adviser Dominic Cummings, the guru who masterminded the Vote Leave victory.

It’s reported that Mr Cummings is “considering” resigning in support of his friend.

He tweeted: “We are in the most serious public health crisis for over 100 years.

“We passed the grim milestone of 50,000 deaths today yet Downing Street spin doctors are preoccupied with squabbling likes rats in a sack.”

In a statement Mr Cain said:

“After careful consideration I have this evening resigned as No10 director of communications and will leave the post at the end of the year.

“It has been a privilege to work as an adviser for Mr Johnson for the last three years – being part of a team that helped him win the Tory leadership contest, secure the largest Conservative majority for three decades – and it was an honour to be asked to serve as the prime minister’s chief of staff.

“I would like to thank all the team at No10 – including the many unsung and incredibly talented civil servants – for their hard work and support during the last 18 months.

“And most of all I would like to thank the prime minister for his loyalty and leadership.

“I have no doubt that under his premiership the country will deliver on the promises made in the 2019 election campaign and build back better from the coronavirus pandemic.”

Mr Johnson said: “I want to thank Lee for his extraordinary service to the government over the last four years.

“He has been a true ally and friend and I am very glad that he will remain director of communications until the new year and to help restructure the operation.

“He will be much missed.”