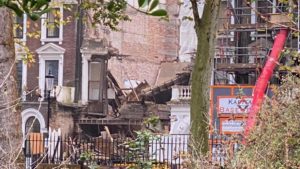 A £6 million Chelsea home has collapsed during building work on its basement.

Neighbours reported hearing a bang “as loud as thunder” as the mid-terraced home crashed to the ground.

Buildings either side of the property in Durham Place had to be evacuated and secured.

More than 40 people were told to leave their homes by the London Fire Brigade.

One resident said: “There was just a huge thud.

“I thought it was thunder but there was only the one loud thud.

“It wasn’t until the morning on my way to work that I saw the building had collapsed.

“There were lots of police and the road was sealed off.

“Workmen have been there for weeks excavating a basement.

“I don’t think anyone was in the property at the time, but it is going to be very expensive to fix.

“The roof has just collapsed inwards and taken down the whole of the inside.”

The ruined house was empty at the time.

It is owned by the family of a late Hollywood movie mogul.

The owners had been given planning permission for a three-metre extension to the lower ground basement of the house, along with a new upper terrace.

The permission did not include any work to extend the basement downwards.

It is being refurbished on behalf of British Virgin Islands-based firm Seabrook Properties.

“People are getting approval all the time from the council.

“Whenever you hear there’s a basement being built you have to ask, is this a smart thing to do? Can they handle it? You hear stories of them collapsing and it just makes us sad.”