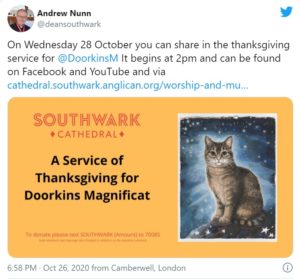 A memorial service has been held for a cat who spent 12 years living in Southwark Cathedral.

Doorkins Magnificat had her own social media account, met the Queen, and appeared in a children’s book.

The Dean of Southwark Cathedral Andrew Nunn told 30 people at the service:

“In more normal times, we often host memorial services for the great and the good.

“But I don’t think there’s ever been a service for a cat.

“She [Doorkins] did more to bring people to this place than I will ever do.

“Some may think that cats don’t deserve ceremonies, eulogies, and prayers, that their death should pass without comment or occasion, but I can’t agree.

“I’m not particularly a cat person, or at least I wasn’t before I met her, but this little cat, who arrived at our door, who chose us and stayed changed our lives and enhanced our mission and ministry.”

She was laid to rest in the cathedral garden.

However, the ceremony has caused an unholy row.

The Bishop of Burnley wrote:

“If not it’s grossly insensitive to bereaved families and those ministering to them in the North West under the regional Coronavirus restrictions.’