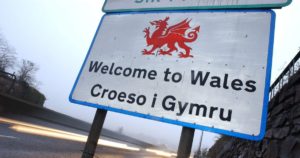 An English family was “escorted” out of Wales by the police because they had “no reason” to be there.

The family from Sussex was stopped by officers from the Dyfed-Powys force.

The car had been on the road for more than five hours before reaching Wales.

Under lockdown rules people from the rest of Britain can’t go into Wales without an essential reason.

The police said the family was “suitably advised and escorted” back over the border.

Wales as been “out of bounds” to visitors since mid-October under a two-week “firebreak” lockdown.