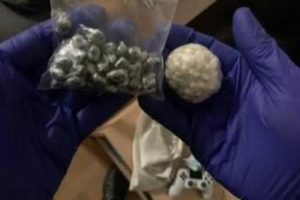 Fifty-three suspects have been arrested in Operation Trigona.

County lines is the movement of drugs from cities to the provinces.

Runners are often children or vulnerable people being exploited by gangs.

A total of 47 men and six women – aged between 16 and 48 – were arrested over the six weeks’ Metropolitan Police operation.

It’s alleged they were dealing in heroin and crack cocaine.

The raids came after a five months’ long undercover investigation.

They seized 320 grams of crack cocaine, 150 grams of heroin and cannabis.

“Operations like this one, which disrupt county lines drug supply and dealing, and target the criminal exploitation of vulnerable people, are vital because we know that this type of criminality drives a high proportion of violent crime in London.

“During this operation we have identified two young people who were victims of this type of exploitation, who we are now safeguarding and working with to give them the support they need.”