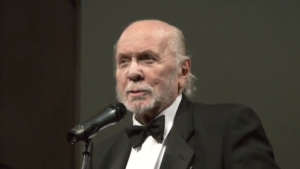 Kretzmer also penned the song “She” for Charles Aznavour in 1974.

“She” was a signature song for the rom-com film Notting Hill.

But it is for his work on Les Mis that the South African born writer will be remembered for.

“His wonderful words for Les Misérables will live on in his memory forever more.”

“The great lyricist and man of theatre and popular song, Herbert Kretzmer, has died.

“From Les Mis to ‘She’, TW3, ‘Goodness Gracious Me’ and so much more, he was a giant of his trade.

Kretzmer was the television critic for the Daily Mail.