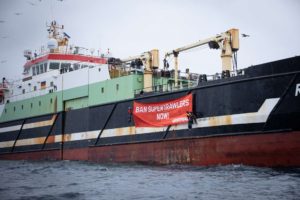 Greenpeace campaigners have boarded a supertrawler fishing in the North Sea.

The activists claim the ship, the Helen Mary, is fishing in protected waters.

Greenpeace claims the vessel is trawling in the Central Fladen area, east of Scotland.

The protesters launched the demonstration from their ship Esperanza to climb aboad the 117-metres long Helen Mary.

And they left fishing deterrents in the ship’s nets.

The German registered Helen Mary has since left the area

In 2019, the same vessel was held at sea by Marine Scotland on suspected fishery offences.

Chris Thorne, a Greenpeace campaigner on board Esperanza, said:

“Supertrawlers have no place in our protected areas.

“What use is a protected area, when the highest intensity industrial fishing vessels are allowed to operate inside it?

“Regardless of whether a protected area protects the seabed, or marine life like porpoises which are directly threatened by supertrawlers, the operations of a supertrawler in a supposedly protected area make a mockery of the word protected.”

Supertrawlers are high intensity fishing ships daily scooping up hundreds of tons of fish into its mile-long nets.