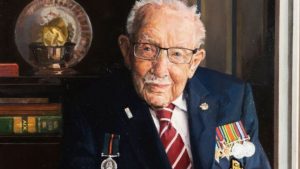 An official portrait of NHS fundraiser Captain Sir Tom Moore has been unveiled at the National Army Museum in London.

The oil-painting marked the veteran’s astounding achievement of raising more than £32 million for charities.

The picture – painted by Alexander Chamberlain – was shown as part of the VJ Day commemorations.

Mr Chamberlin said Capt. Sir Tom had been “incredibly accommodating” and he was “hugely proud” to have painted it.

One-hundred-year-old Capt. Sir Tom had set out to raise £1000 walking the length of his garden in Bedfordshire.

But his determination and tenacity captured the nation’s feeling as the coronavirus pandemic took told.

“I was approached by a colonel in the Army who saw the need to record [Capt Sir Tom’s] story in the kind of language of the portrait… and he knew my work, because I had painted heads of state, politicians and pop stars”.

“It’s led to this, and I’m hugely proud to have been involved.”

Capt. Sir Tom is shown wearing his medals, regimental tie and even the gold Blue Peter Badge awarded to him in recognition of his fundraising efforts.

He had been stationed in Burma during World War Two.

In a statement released by the museum, he said:

“Victory over Japan is as important a part of our history as Victory in Europe and I hope that it is really never forgotten.

“It is wonderful to know that the portrait will be displayed at the National Army Museum to connect the public with this history, and I hope it continues to help tell the history of the British Army for decades, maybe even centuries, to come.”