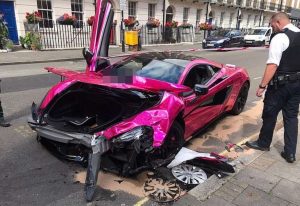 The bright pink two-seater was left a wreck after it’s reported the driver lost control.

The car’s 3.8 twin-turbo V8 engine delivers a blistering 0-60 in less than three seconds.

“We go to many incidents involving crashed vehicles.

‘But not that many where one of those vehicles is a McLaren 570 supercar.

“Crews from Euston attended this RTC on Montagu Mansions, Marylebone last week to make the scene safe after a driver lost control.”

Car magazine Auto Trader describes the 570S as “less technologically sophisticated than McLaren’s other models, but it’s no less enjoyable”.

“The handling is sensational; the ride is comfortable, and the engine delivers truly devastating pace.

“Chuck in the appealing interior and looks that are more exotic than the price tag suggests, and you have a very tempting sports car package.”