“Little or no public sympathy” for migrants crossing the English Channel, survey reveals 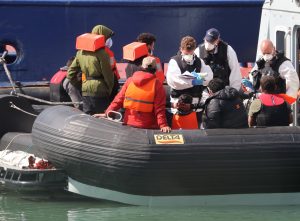 Nearly half of the British public have little or no sympathy for migrants trying to cross the English Channel from France, a survey shows.

Over the last four days more than 670 people have managed to make their way to the UK.

However, despite the perilous journey, a YouGov survey reveals the public has “no sympathy at all” to “not much sympathy”.

The poll also showed that nearly three quarters (73%) of Conservative and Leave voters had “no sympathy”.

And of those people, 57% of Conservative voters and 75% of Leave voters say the UK does not have a responsibility to help protect the migrants who are arriving.

More generally, 46 per cent of Britons say that the UK has done more than its fair share to accommodate refugees who have arrived in Europe when compared to other European countries.