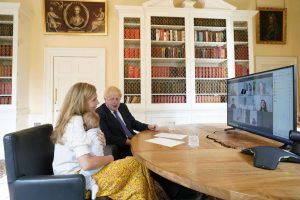 Prime Minister Boris Johnson, his partner Carrie and new son Wilfred are said to be going to Scotland for their summer holidays.

The family will spend two weeks north of the border.

Mr Johnson had earlier spoke of a “brief staycation to creep into the agenda, if that’s possible” when asked about his summer plans.

A No 10 source declined to comment on the break – but did not deny the report.

Speaking last month, Mr Johnson said: “I would encourage people still to think of wonderful staycations here in the UK.

“There are all sorts of fantastic destinations, the best in the world, I would say.

“All my happiest holiday memories are of holiday vacations here in the UK, bucket-and-spade jobs or whatever, and I thoroughly, thoroughly recommend it, and I’m sure that people will have a great time over the summer.”