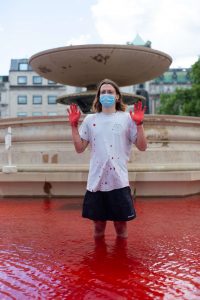 Two animal rights activists have been arrested after turning the Trafalgar Square fountains red with dye.

Animal Rebellion said it was a protest against animal farming.

It said the Government had “blood on their hands”.

Some demonstrators claimed the Covid-19 pandemic was caused by animal exploitation.

“Two people have been arrested on suspicion of criminal damage following an incident at the fountains in Trafalgar Square earlier today.

“They remain in custody.”

“The Government must now begin a transition towards a plant-based food system, or risk future zoonotic pandemics of catastrophic proportions.”

Animal Rebellion said the central London action was co-ordinated with protests with 20 other cities – including Bristol, Brighton and New York.