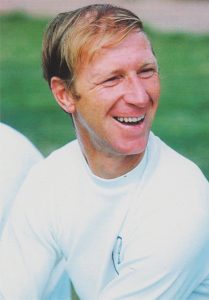 Both played an integral part in England’s 1966 4-2 victory at Wembley against Germany.

He was a hard man on the pitch – uncompromising in his tackling and attitude.

Geoff Hurst, who scored a hat-trick in the final, tweeted:

“Another sad day for football. Jack was the type of player and person that you need in a team to win a World Cup.

“He was a great and loveable character and he will be greatly missed.

“The world of football and the world beyond football has lost one of the greats. RIP old friend.” 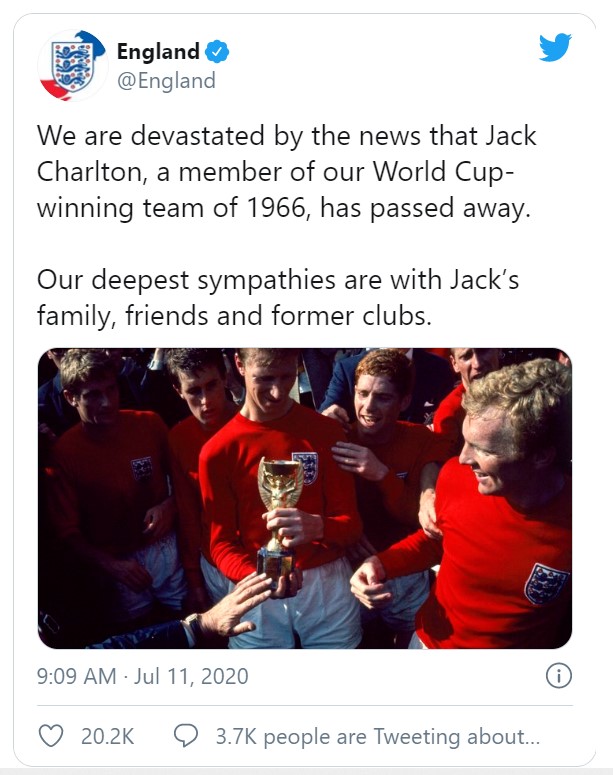 Jack was also a one-club man – making a record 773 appearances for Leeds United over a 20-year playing career.

He took to management after he stopped playing – and with some success.

Apart from a clutch of teams he also managed the Republic of Ireland.

He led them to their first major finals at Euro 88 and the World Cup quarter-finals at Italia 90.

His family said in a statement:

“Jack died peacefully on Friday 10 July at the age of 85. He was at home in Northumberland, with his family by his side.”

Within minutes of the news breaking many footballers and commentators paid their tributes on social media.

“Jack Charlton was a football great whose achievements brought happiness to so many. My sympathies are with his family and friends.”

“Very sad to hear that World Cup winner Jack Charlton has died. A true one club @LUFC player and a giant of English and Irish football.”

“Saddened to hear that Jack Charlton has passed away. World Cup winner with England, manager of probably the best ever Ireland side and a wonderfully infectious personality to boot.”

“Absolutely gutted. Father figure to me for 10 years, thanks for having faith in me. Sleep well Jack, Love ya. Broken heart.”