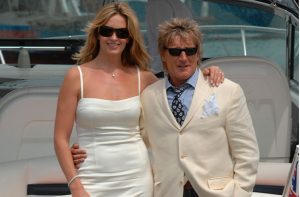 Sir Rod Stewart wants to put up four naked statues in the garden of his £5 million UK home.

His wife Penny Lancaster is seeking planning permission for the Greek style sculptures.

The two male and two female statues will be installed on four pillars of a portico at the 18th Century Grade II listed building in Essex.

The structure will overlook an ornamental pond.

A planning application has been sent to Epping Forest District Council.

If permission is granted, Aralia Garden Design is to carry out the work – creating “a classical garden space”.

The planting will help create an “ecological diverse habitat”.

Sir Rod, 75, and Penny, 49, are in Britain self-isolating after leaving their home in Florida.

The singer bought the 10-bedroom property in 2013.

Epping Forest District Council is expected to decide next month on the application.

It is understood there are no objectors.