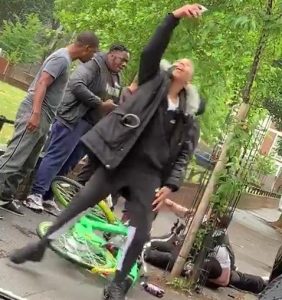 Two police officers who stopped to help someone were set upon in a “sickening, shocking and disgraceful attack”.

The officers – one a woman – were surrounded by men, kicked, and punched.

One man was carrying a baseball bat.

The attack in Hackney, East London, has been condemned by the Home Secretary Priti Patel and police chiefs.

The Metropolitan officers were treated for minor injuries after the assault in Frampton Park Road.

It’s said they were flagged down by someone who said they’d been assaulted.

They pointed towards a group of men standing nearby.

Two men, aged 20 and 38, have since been arrested on suspicion of assaulting the police and are in custody.

“This incident, which was captured on someone’s mobile phone, is truly shocking.

“My officers went to the assistance of a member of the public – who asked for their help – after stating that they had been assaulted.

“What happened next is a reminder of the risks our officers take whilst going about their duties.

“It is fortunate that their injuries are not more serious.

“There is no place for this level of violence on our streets.”

“Yet again this starkly shows the dangers our officers face and the bravery they show each and every day keeping Londoners safe.”

“We are not society’s punchbags.

“We have families we want to go home to at the end of every shift.

“But the dangers are stark. And seemingly escalating.”

“My thoughts are with the outstanding @metpoliceuk officers who were subject to this disgusting violent attack.”

And John Apter, chairman of the Police Federation, said:

“Disgusting behaviour from those who attack the officers, those who film what’s going on and those who do nothing.

“They are cowards, the lot of them.”

This happened in hackney today 😯😯 pic.twitter.com/ZBW4moNRCn