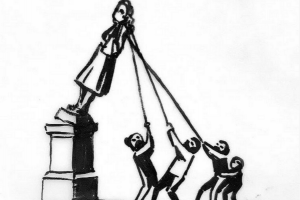 Artist Banksy has drawn a sketch of what should replace the toppled stature of slave trader Edward Colston.

Tongue in cheek, he suggests filling the now empty plinth with another memorial.

He says the Colston bronze rolled off the Bristol quayside should be recovered from the River Avon and put back.

A rope should be put around its neck and four new bronze statues of protesters are seen to be pulling Colston down.

“What should we do with the empty plinth in the middle of Bristol?

“Here’s an idea that caters for both those who miss the Colston statue and those who don’t.

“We drag him out the water, put him back on the plinth, tie cable round his neck and commission some life size bronze statues of protestors in the act of pulling him down.