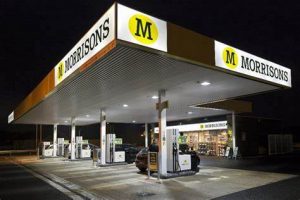 Supermarket chain Morrisons has cut the price of petrol to 99.7 pence a litre.

It’s the first time petrol has been sold across the UK for less than a pound in four years.

Filling a family car with 55 litres is now £7 cheaper than seven weeks ago.

“This cut will help people who are travelling to work, those shopping for essentials, and those assisting the elderly and vulnerable.

“We want to play our full part in reducing the cost of living and feeding the nation at this difficult time.”

The average cost per litre of petrol and diesel on May 4th was 107.6p and 114.9p respectively.

Fuel costs have dropped because of a collapse in oil prices.

There’s been little demand as global economies reel from the coronavirus pandemic.

Road usage in the UK has dropped by half since the lockdown began.

The level of traffic is the same as 50 years ago.