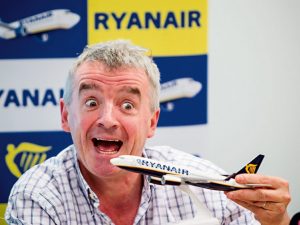 Airlines have been ordered to repay more than £7 billion in refunds for cancelled flights and holidays.

The travel companies have been “holding off” on paying back the money, fearing it will cripple their businesses.

The companies have become embroiled in a consumer row after offering disappointed travellers flight vouchers, wrapped up in complicated “use by” dates.

Ryanair boss Michael O’Leary dismissed the repay order by the Competition and Markets Authority as “nonsense”.

He said it would cripple the finances of major airlines if they had to pay back within the stipulated seven days.

The billionaire owner added it would “wipe out” Virgin Atlantic, and British Airways would be “almost wiped”.

Mr O’Leary said offering vouchers or credit notes instead of cash refunds, was “not some kind of scam”.

Ryanair has 30 million refunds to process manually, and with fewer staff.

“If you want the cash refund you will have to have a cash refund, but it is going to take us weeks and months to process this backlog.

“We are offering vouchers not in some kind of scam but simply as a way of getting rid of the bloody backlog.”

Mr O’Leary said the redundancies were “the minimum we need now, and we may be back for more in the winter”.

The remaining staff will be asked to take a 20pc reduction in wages.

He slashed his own pay packet in half.

The carrier said it expects to restart services in July.

While a reduced schedule is planned, Mr O’Leary predicted “a rush to get to the beaches in July and August”.