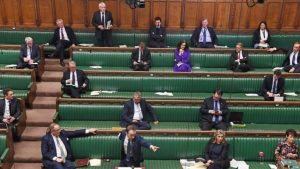 The one-off payment is to help politicians cover increased costs during the coronavirus lockdown.

But many see the money as crass, given thousands of people are dying and millions could lose their jobs.

Also, the NHS is under immense pressure to save lives and keep frontline staff safe.

The petition was started on Change.org by Lucy Pearson.

Lucy wrote: “While the rest of us lesser mortals struggle to pay bills, navigate HMRC and for many, learn they are not entitled to any support whatsoever during these dark times, already financially stable MPs are being given yet another perk.

“The extra budget can be used to buy equipment such as laptops and printers for MPs and their staff, or to cover additional electricity, heating and phone bills.”

“This is an opportunity for all of us to unite and tell those in power that we’ve had enough of the gross inequalities that exist in this country”.

“It is wrong to characterise this extra £10,000 allocated by the Independent Parliamentary Standards Authority (IPSA) as MPs giving themselves additional funds.

“On the contrary, this money is being used to enable MPs’ staff to set up home working to support distressed constituents at a time of crisis.”

He stressed: “The additional budget is there to draw down on if it is needed and required – and it will have to be accounted for in the usual way.”

IPSA was set up in the aftermath of the expenses scandal.

It says the £10,000 covers fact many MPs and their staff members “were not set up for home working, nor for supporting constituents remotely”.

It added: “This additional funding is to help them make that transition, while they deal with a huge increase in workload from distressed constituents as a result of coronavirus issues.”