Bears should be brought back to Britain’s countryside 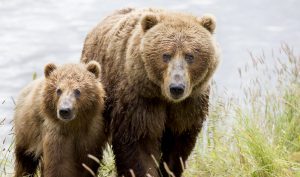 Bears should be brought back to the British countryside, says the new head of the Wildlife Trusts.

Dr Craig Bennett argues the disappearance of the bear is just as significant as if we lost Shakespeare’s works or St Paul’s Cathedral.

The Brown Bear (Ursus arctos) was once common in Britain.

It’s thought it died out in the early Middle Ages.

Dr Bennett said: “For years we have talked about nature conservation in Britain, I don’t like that word as it implies conserving things as they are.

“Nature is shockingly depleted in this country, what we’ve got to do is focus firmly on drawing a line in the sand, saying none can be lost and we have to focus on nature recovery.

“We want 30 per cent of our land and sea dedicated to nature in the UK.

The Wildlife Trusts in England have already brought beavers onto their land.

The campaign has returned excellent ecological advantages as the mammals create new habitats for fish and invertebrates.

Dr Bennett said: “Every time there is a British native species that is missing, that is a part of Britain that is missing, it’s the same as if we lost St Paul’s Cathedral or Shakespeare’s works.

“When we have beavers or lynx missing, that is a big part of British culture missing.

“With those species missing from our ecosystems, they are not functioning the way they should.

“This even includes the bear, which went extinct from Britain since the early Middle Ages.

“Obviously in some cases this is a very long way off.

“For species like bears and so on that’s not going to happen anytime soon.”