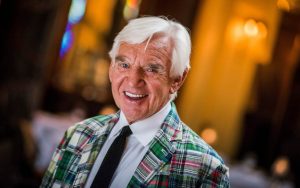 Bill Martin, one of Britain’s most prolific and successful song writers, has died. He was aged 81.

With writing partner Phil Coulter, he penned “Puppet On A String” for Sandie Shaw to give the UK its first Eurovision victory in 1967.

He followed that success with “Congratulations” sung by Cliff Richard a year later.

It came second in the contest – but sold 10 million copies worldwide.

Martin’s other number one hits were “Back Home” for the 1970 England World Cup squad and “Forever & Ever” for Slik – a one-hit wonder glam-rock band fronted by Midge Ure.

Along with Coulter the song-writing team had a hit in America with Elvis Presley singing “My Boy”.

And in 1975 they shot the Bay City Rollers to the top of the Billboard 100 with “Saturday Night”.

Martin, born in Glasgow, won five Ivor Novello awards and received an MBE for services to music in 2014.

“He was my song writing partner for almost twenty years and an important part of my life and career.

“I remember with most affection our early struggles in Denmark Street. End of an era.”

“Bill epitomised the era of the ‘Tin Pan Alley’ songwriter.

“He always dressed impeccably, greeted everyone with a smile and a quip and had a nose for a great song.

“Everyone in the song writing and publishing community knew Bill and with a clutch of huge hits to his name, he became known the world over. “

Before finding a career in music Martin worked as an apprentice in the Govan shipyard.

He was also a talented footballer at league level.