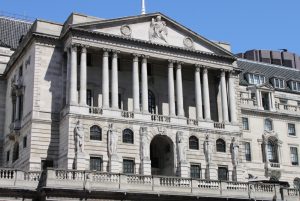 The Bank of England has cut the base rate of interest to 0.1% as the world economy shakes under the coronavirus pandemic.

The Bank of England’s Monetary Policy Committee (MPC) voted unanimously in favour of the rate cut.

In a statement, the central bank said:

“Over recent days, and in common with a number of other advanced economy bond markets, conditions in the UK gilt market have deteriorated as investors have sought shorter-dated instruments that are closer substitutes for highly liquid central bank reserves.

“At its special meeting on 19 March, the MPC judged that a further package of measures was warranted to meet its statutory objectives.

“It therefore voted unanimously to increase the Bank of England’s holdings of UK government bonds and sterling non-financial investment-grade corporate bonds by £200 billion to a total of £645 billion, financed by the issuance of central bank reserves, and to reduce Bank Rate by 15 basis points to 0.1%.”

The central bank will also increase its holdings of UK government bonds and sterling non-financial investment-grade corporate bonds by £200 billion.