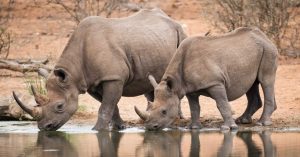 The number of African black rhinos is rising after conservation efforts.

The achievement has been made through law enforcement measures and managing the rhino population.

“While Africa’s rhinos are by no means safe from extinction, the continued slow recovery of black rhino populations is a testament to the immense efforts made in the countries the species occurs in, and a powerful reminder to the global community that conservation works.

“At the same time, it is evident that there is no room for complacency as poaching and illegal trade remain acute threats.”

Population models indicate numbers will continue to rise gradually over the next five years.

Despite a drop in figures, poaching is still the main threat to black rhinos.

“If the encouraging declines in poaching can continue, this should positively impact rhino numbers.

“Continued expenditure and efforts will be necessary to maintain this trend.”