When I’m 64 – Sara rows into the record books 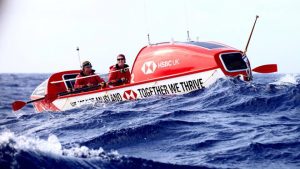 Sixty-four-year-old Sara Brewer is the oldest woman to row across any ocean after finishing a 3,000-mile Atlantic crossing.

Ms Brewer set off from La Gomera on December 12th with her rowing partner Ann Prestidge – a mere 35-year-old.

The couple took it in turns by taking one and a half hour stints pulling the oars.

They reached the coast of Antigua on the eve of International Women’s Day (March 7th).

She said: “We never anticipated it would take us this long.

“We were hoping to finish in mid-February, so the extended row has been tough both mentally and physically.

“For the past three weeks, we’ve been surviving on two meals a day and next to no sleep.

“I appreciate how lucky I am in my normal life and I will never again look upon it as being dull and mundane.”