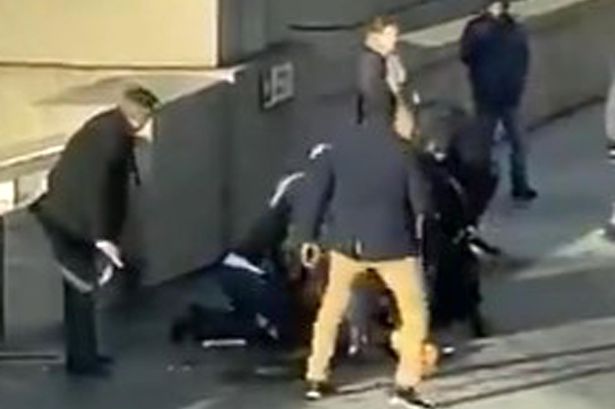 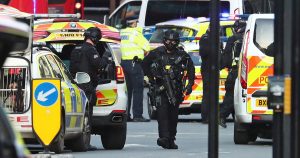 A man and a woman were the victims of a terrorist knife attack on London Bridge.

Both were killed by a known terrorist who’d recently been released from prison.

Three other passers-by were also injured – a man and two women.

The knifeman, named as Usman Khan was shot dead by police officers.

It’s believed he was wearing a fake suicide vest.

Khan had been chased across London Bridge after attacking guests at a justice seminar at Fishmongers’ Hall.

He was brought to the ground by “have-ago-heroes” using a fire extinguisher.

Another brave man was brandishing a 5ft long Narwhal tusk, an exhibit taken from the Hall.

“The circumstances, as we currently understand them, are that the attacker attended an event earlier on Friday afternoon at Fishmongers’ Hall called ‘Learning Together’.

“We believe that the attack began inside before he left the building and proceeded onto London Bridge, where he was detained and subsequently confronted and shot by armed officers.

“As you would expect, due to the nature of the incident, we responded as though it was terrorist-related.

“I am now in a position to confirm that it has been declared a terrorist incident.

“Officers from the Met’s Counter Terrorism Command are now leading this investigation.

I must stress, however, that we retain an open mind as to any motive.”

Witness Celia Sodera was on the top floor of a bus crossing the bridge.

“We saw six people keeping someone on the floor.

“At one point someone said, ‘he has a knife’.

“And we thought, ‘oh my god this guy was going to stab someone’ because we saw people running away.

“Then the police came and finally they removed the knife, then they shot the guy.

“He was still alive, and he tried to pull the black jacket off, so I was able to see the vest he was wearing and it seemed like a very scary device, a bomb device.”

London Mayor Sadiq Khan praised the “breath-taking heroism” of the passers-by who risked their lives.

“Anybody involved in this crime and these attacks will be hunted down and will be brought to justice.”