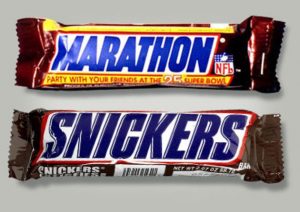 Snickers chocolate bars have returned to its original name Marathon after 30 years.

Makers Mars will produce a limited Marathon edition to be sold in Morrisons.

Even the price is a 90s throwback.

Today’s cost is 25 pence a bar – and it was 24 pence when they were first introduced.

The bars were then called Marathon in the UK and Snickers in America.

The name was changed to make the brand globally consistent.

A spokesman for Mars said: ‘It’s a great way to celebrate over 85 years of Mars making chocolate in the UK.

“We hope this serves as a wonderful treat for fans of Snickers who remember when it was called Marathon!”