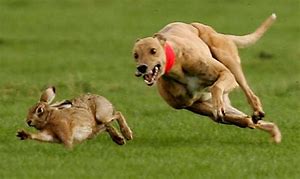 Cruel hare coursers have abandoned chasing hares with dogs and are using quad bikes to ride down the animals.

These men were caught chasing the hares before running over them when cornered.

One witness – too frightened to be named – said: “A hare was feeding her young when the bikers appeared. The mother found it impossible to escape the speeding bikes. It was horrible to watch.

“It was the most evil barbaric acts I have ever seen.”

The bikers were caught on camera in a Nottinghamshire village near Newark.

The witness added: “It was a peaceful countryside day until the bikers appeared. They tore up crops as they chased the hares.

“They were chased to their deaths by three men on quad bikes and two riding trial bikes.

“They were smashing into them and then clubbing them to death.

“The rider in grey clothing had a rucksack for the quarry.”

Hare coursing is normally done with dogs like lurchers and greyhounds.

At night hare coursers use 4×4 vehicles with powerful headlights.

The hares are blinded, and escape is almost impossible.

The footage has been handed to the police.

And, there’s a £250 reward for anyone who can identify the culprits.

A Newark police spokesman said: “These men may be able to help with our inquiries in relation to suspected hare-coursing and damage to farmers’ crops.”

Hare coursing is illegal in Britain but it’s hard to catch coursers in the open countryside.

In rural areas police helicopters and drones have been employed.

Those caught in the act can have their vehicles and cash seized as well as a court summons.

It’s feared hare coursing is on the increase.

In just three months in Cambridgeshire more than 450 incidents were reported.

“The police are struggling to keep on top of the problem because of the increasing number of coursers coming into the county.

“The farming world understands that the police have other priorities than rural crime and don’t have enough resources to tackle it.

“However, there doesn’t seem to be a deterrent to stop these people coming in.

“The worst thing of all this is the threat and intimidation of confrontation between land owners and coursers.”

He said: “The seizure of vehicles is an excellent method of causing inconvenience to such offenders and clearly, when most offences are committed by offenders from outside of the region, it will leave the criminal with the problem of getting home.

“The cruelty of the crime is often in the destruction of wildlife.

He added: “We will deploy air support to obtain comprehensive footage of the activities that are taking place, where it is possible to do so.

“This includes the use of both police helicopter resources, and more recently the consideration of drone technology too.

“We want prospective offenders who are considering these offences in our region to see East Cambridgeshire as a hard target, and that the downside of being caught here is that you are likely to be deprived of far more than it is worth to the criminal in coming here.”

The NFU stressed the need for a dedicated rural policing team to tackle countryside crime.

NFU Deputy President Minette Batters said: “The NFU is hearing from farmers that there have been dramatic increases in all rural crime, but hare coursing in particular is causing incredible cost and damage to farm businesses.”

“There needs to be robust action against hare coursers to end this blight on our countryside and ensure that farmers do not continue to be targeted by criminals.”