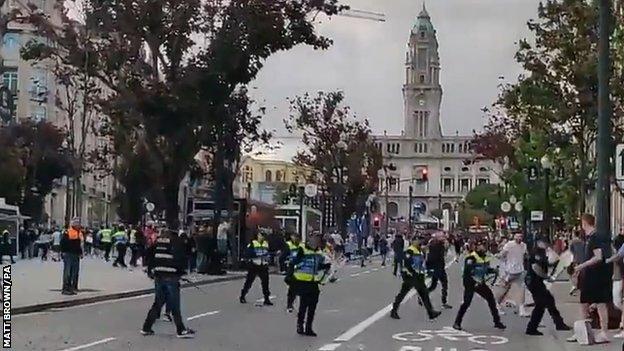 Fans responsible for trouble in Porto before Thursday’s Nations League semi-final are “not true England supporters” and an “embarrassment to the team”, the Football Association has said.

There was trouble in the city for a second night as some England fans clashed with riot police on Wednesday.

Bottles were thrown at Portuguese fans in a fans’ zone as supporters watched Portugal beat Switzerland 3-1.

A UK police chief has called their behaviour “completely unacceptable”.

Some fans are staying in Porto, which is 30 miles away from Guimaraes where England face the Netherlands.

The trouble comes a week after the FA released their ‘Don’t be that idiot’ campaign, warning fans about anti-social and “embarrassing behaviour”.

“The FA strongly condemns the scenes witnessed in Porto overnight,” it said in a statement.

“Anyone responsible for these disturbances cannot be seen as true England supporters and are not welcome in football. They are an embarrassment to the team and the thousands of well-behaved fans who follow England in the right way.”

“The behaviour of a small number of the England fans out here continues to tarnish the reputation of the genuine fans who are simply trying to enjoy the football,” said Roberts.

“It is believed the fans had been throwing bottles at Portugal fans who were watching the match in the same area.

“This is the second evening in a row where disorder has occurred in Porto. Last night there were issues outside a bar, where bottles were thrown and minor damage was caused.

“The behaviour we are witnessing is incredibly disappointing and again I would point fans towards the recent video from the FA – ‘Don’t be that idiot’.