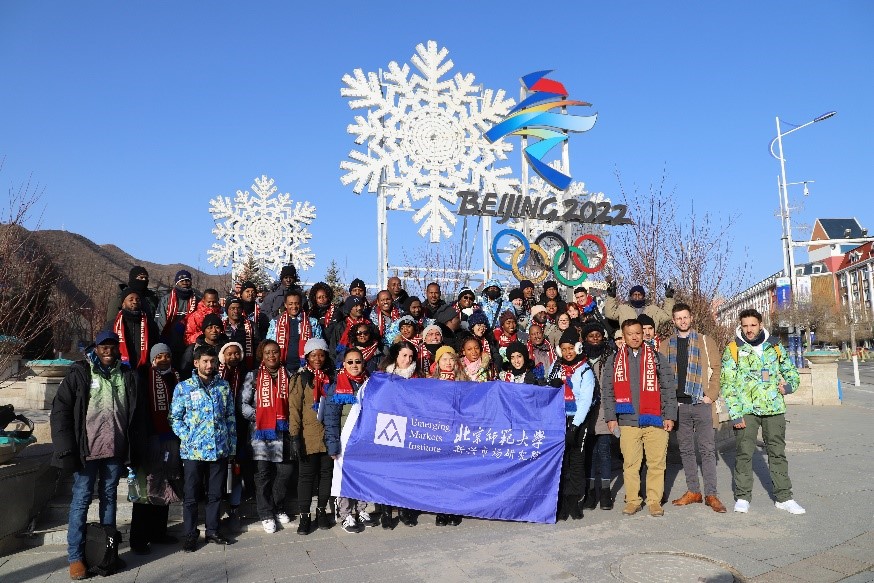 The Chongli district in Zhangjiakou city has been transformed from an impoverished and previously unknown agricultural county into a hot tourism destination with a booming winter sports industry, having ridden the wave of the Olympics since Zhangjiakou became one of the competition zones for the Beijing 2022 Winter Olympics.

To find out the reasons behind this stunning transformation, students from the Belt and Road School (BRS) of Beijing Normal University visited Chongli at two different times, first in 2017 and then again in 2019.

During each of the respective trips, students from over 20 different countries met with local government officials and visited project sites, snow parks, the Olympic Museum, as well as the Fu Long snow town. They learned about China’s efforts in developing its winter sport industry and reflected on how their own countries can learn from China’s experiences.

Chambalo Said Issa, an MBA student from Tanzania, said, “I studied corporate social responsibility in class before, but through this trip I obtained a great chance to see how it can be executed and affect the living standards of people within the society.”

He noted that Tanzania, as one of the developing countries in the Global South, has many things to learn from China, which is now the second largest economy in the world.

“Through the trip I have seen some areas that are useful for the economic development of my country (Tanzania), including business diversification by companies, more investments in the tourism sector and in technology, the proper planning and implementation of projects, more investments into infrastructural developments and improvements in cultural activities and hospitality,” he elaborated.

Hardy Jalloh, an IMBA student from Sierra Leone, said what impressed him the most during the trip was the effective collaborative coordination of resources and people.

“The leaders of Chongli adopted an agenda for reform and transformation. The strategies include mobilizing resources, increasing investment, rapid infrastructure development, and urban and rural planning. In the process, the CPC Chongli district committee implemented these strategies to support the local people and encourage them to participate in the reform process. The local people themselves were willing to participate and contribute to the agenda,” said Jalloh.

This milestone could have not been achieved without the joint effort of society, including the local people and local government, along with private sector participation and central government support, he said, adding that “the Chongli model is a typical example, and learning by doing is the key message.”

“This field visit widely opened up our perspective on China,” said Romtham Khumnurak, an IMBA student from Thailand, who stated his belief that “the future of Chongli will be brighter after hosting the Winter Olympic Games.”

“During and after my field trip to Chongli, I have learned and seen so much about China’s development. This is also a chance for me to look back at my own country and learn what benefits the country can receive after hosting events and what it has to trade off.”

Khumnurak said the 2022 Winter Olympics is a huge project that has provided a significant jump forward for the city in terms of its infrastructure and construction, as well as the city’s urban layout and function, providing business opportunities and raising local people’s living standards.

“I believe the hosting of the Winter Olympics will bring a big success to China,” he said.