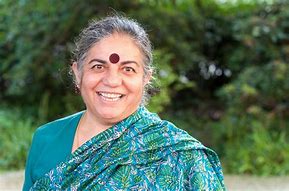 Food is not a commodity, it is not “stuff” put together mechanically and artificially in labs and factories. Food is life.

Food holds the contributions of all beings that make the food web, and it holds the potential of maintaining and regenerating the web of life.

Food also holds the potential for health and disease, depending on how it was grown and processed.

Food is therefore the living currency of the web of life.

As an ancient Upanishad reminds us “Everything is food, everything is something else’s food. “

Good Food and Real Food are the basis of health.

In Ayurveda, India’s ancient science of life, food is called “sarvausadha” the medicine that cures all disease.

Industrial food systems have reduced food to a commodity, to “stuff” that can then be constituted in the lab.

In the process both the planet’s health and our health has been nearly destroyed.

Three-quarters of the planetary destruction of soil, water, biodiversity, and half of greenhouse gas emissions come from industrial agriculture.

In turn, it contributes to 75% of food related chronic diseases and 50% of the Green House Gases driving climate change.

Chemical agriculture does not return organic matter and fertility to the soil.

Instead it is contributing to desertification and land degradation.

It also demands more water since it destroys the soil’s natural water-holding capacity.

Industrial food systems have destroyed the biodiversity of the planet both through the spread of monocultures, and using toxics and poisons which are killing bees, butterflies, insects, birds, leading to the sixth mass extinction.

Biodiversity-intensive and poison-free agriculture, on the other hand, produces more nutrition per acre while rejuvenating the planet. It shows the path to “Zero Hunger” in times of climate change.

The industrial agriculture and toxic food model has been promoted as the only answer to economic and food security. However, globally, more than one billion people are hungry. More than three billion suffer from food-related chronic diseases.

It uses 75% of the land yet industrial agriculture based on fossil fuel intensive, chemical intensive monocultures produce only 30% of the food we eat.

Meanwhile, small, biodiverse farms using 25% of the land provide 70% of the food.

At this rate, if the share of industrial agriculture and industrial food in our diet is increased to 45%, we will have a dead planet.

One with no life and no food.

The mad rush for Fake Food and Fake Meat, ignorant of the diversity of our foods and food cultures, and the role of biodiversity in maintaining health, is a recipe for accelerating the destruction of the planet and our health.