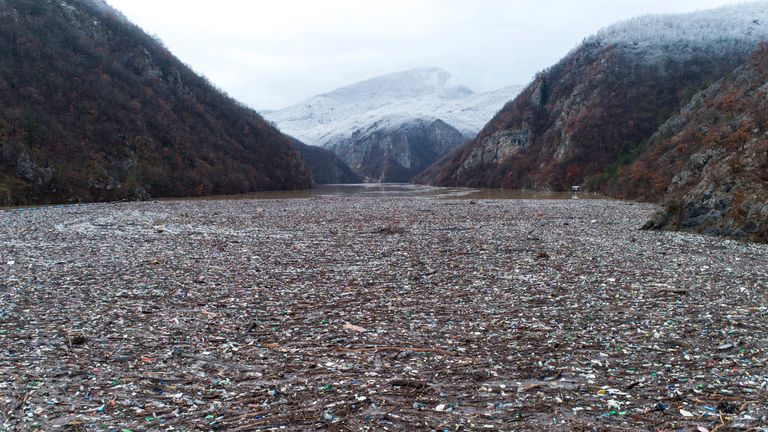 Tonnes of rubbish, including plastic bottles and used tyres, has transformed a river that is known for its stunning scenery and emerald colours into a floating rubbish dump.

After wet weather, the Drina River of Visegrad in eastern Bosnia-Herzegovina was clogged with rubbish.

Poorly managed riverside landfills have left behind a huge carpet of pollution that stretches across the entire width of the river.

According to environmental activists, the blockage has made the town an unofficial regional dump site.

Many rivers and streams in Bosnia and Serbia, Montenegro have overflowed due to heavy rains and unseasonably warm temperatures over the last week, flooding surrounding areas and forcing many people from their homes.

As rain became snow, temperatures dropped in many places on Friday.

It is not the first instance of the rubbish accumulating in the area. The same thing happened in 2021, posing a threat to the ecosystem and the health of the people living there.

Dejan Furtula of Eko Centar Visegrad said that there was a lot of rain and torrential flooding in recent days. There has also been a large inflow of water from Montenegro’s Drina tributaries, which is now subsiding.

“Unfortunately, the massive inflow of trash has not stopped.”

The Drina River, which is a river that runs 346 km (215 miles) through the mountains of northwestern Montenegro and Serbia to Bosnia and Bosnia has an intense green color due to its limestone terrain.

In recent days, around 10,000 cubic meters (more that 353,000 cubic feet of waste) were found behind the barrier. In recent years, the same amount of waste was taken from this area.

The process of removing the waste can take up to six weeks and eventually will be disposed off as landfill.

Furtula stated that the local waste facility “doesn’t even have enough capacity to handle [the] city’s] municipal garbage.” The landfill site is always on fire.

He described the conditions as “not only a huge environment and health hazard but also a great embarrassment to all of us.”

After three-and-a half years of brutal warfare during the 1990s that left 100,000 people dead, the Balkans have fallen behind Europe economically and environmentally.

The countries in the region are not able to build effective and environmentally-sound waste disposal systems despite seeking membership in EU and adopting some EU laws and regulations.

Many countries in the western Balkans face high levels of river pollution. Some towns are among the most polluted anywhere on the planet.