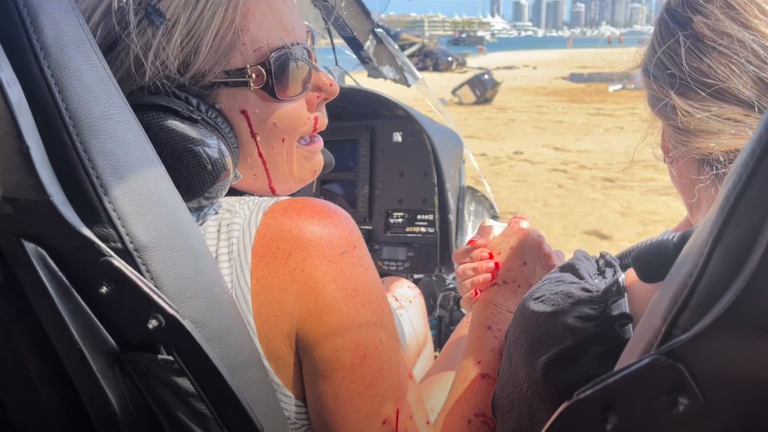 Two helicopters collided in mid-air and killed two people. The survivors have praised their pilot for landing the aircraft without injury. Dramatic new photos show how they were rescued.

Pictures show Marie and Edward Swart, Elmarie Steenberg and Riaan Stewart, two New Zealanders, being evacuated from the ground aircraft after the crash on Australia’s Gold Coast on January 2,.

Four people were killed when two helicopters collided in mid-air.

The helicopter that was carrying seven people crashed onto a beach and killed the four victims.

Pilot Michael James was able to land the second helicopter upright despite the fact that it sustained significant damage from the collision.

Five people in the second helicopter sustained minor injuries while the sixth was uninjured.

The Swarts and Steenbergs made a joint statement to pay tribute to their pilot.

They replied, “Our pilot Michael James. You are our hero. You safely landed the helicopter and kept us and the others safe.

“We are forever grateful to you.”

They also thanked the emergency service personnel and bystanders who helped, as well as staff at a local hospital who came to their assistance after the crash.

They also paid tributes to the victims of the collision by saying: “We want express our deepest condolences and sympathies to the deceased, injured and their families.

“Our hearts are deeply broken by this loss.

“This has been traumatizing for us as survivors and we cannot imagine how their loved ones and families must feel.”

A couple from Britain was killed in a helicopter accident named

Father speaks up as son, 10, fights to save his life

The crash occurred near Sea World in Queensland, and was the result of a fatal collision between a British couple and a Queensland resident.

The holidaymakers Diane Hughes and Ron Hughes, 65 and 57 respectively, are from Liverpool. They were married in 2021.

With seven others, Mr. and Mrs. Hughes were aboard the helicopter.

Ashley Jenkinson, a 40-year old pilot who lived in the Gold Coast, but was originally from Birmingham and was a 36 year-old woman, also passed away.

A 10-year old boy is in critical condition. A 33-yearold woman and a nine year-old boy are both seriously injured.

Angus Mitchell, chief commissioner of the Australian Transport Safety Bureau, said that the incident was a “tragic beginning to the new year”.

He stated that the helicopter’s main rotors collided with the landing aircraft at 200m, causing severe damage to the front section.

During this process, the main body of aircraft was broken off by the rotor blades and gearbox.

Reporters were told by Mitchell that they are fortunate not to have more deaths.

Sea World Helicopters was a separate company that was not affiliated with the park. It expressed condolences and said it was “devastated” but was cooperating with the investigation.