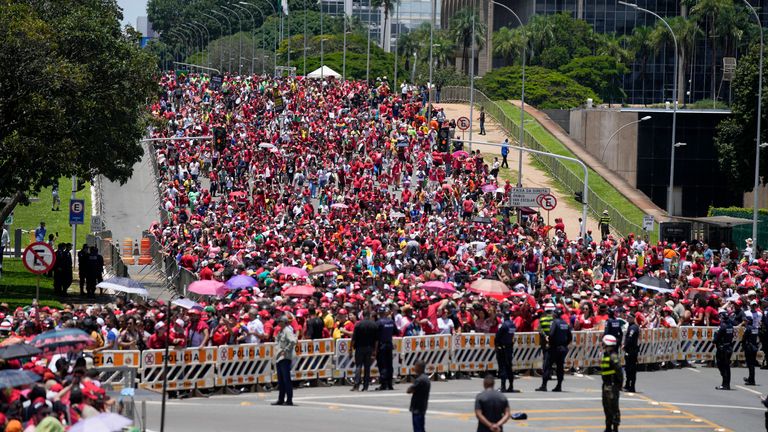 According to military police, a man was carrying an explosive device and knife as he tried to enter the inauguration ceremony of Brazil’s new president.

According to a spokesperson for the city’s military force, the man tried to enter Brasilia’s esplanade to witness the inauguration of President-elect LuizInacio Lula Da Silva.

Following the celebration in Brazil’s Congress, more than 300,000.00 people gathered on the esplanade.

Today, Mr. da Silva, a veteran left-leaning politician was sworn into office in Brazil’s capital. Police are on high alert because of the political tensions in the country.

After being imprisoned in a corruption scandal that cost him his election, Mr. da Silva was released and re-elected the presidency.

Although Mr. da Silva was acquitted of his convictions, he still faced a difficult battle when he decided that he would run for president again. Many millions of Brazilians continue to believe that he is corrupt.

It resulted in one of the most divisive elections in Brazil’s recent history. Left-wing Mr da Silva was matched against right-winger Mr Bolsonaro with their vastly differing visions for Brazil.

Three weeks after his defeat, Bolsonaro blasted a software bug and demanded that large swathes be canceled.

Bolsonaro spent over a year claiming that Brazil’s electronic voting system was prone to fraud. He never presented any evidence.

Some of his supporters accepted defeat while others refused. His supporters marched in protest against the outcome in Sao Paulo, 70 cities and other Brazilian cities.

Others assembled outside military barracks to question results and plead with the armed forces for Mr. da Silva’s resignation.