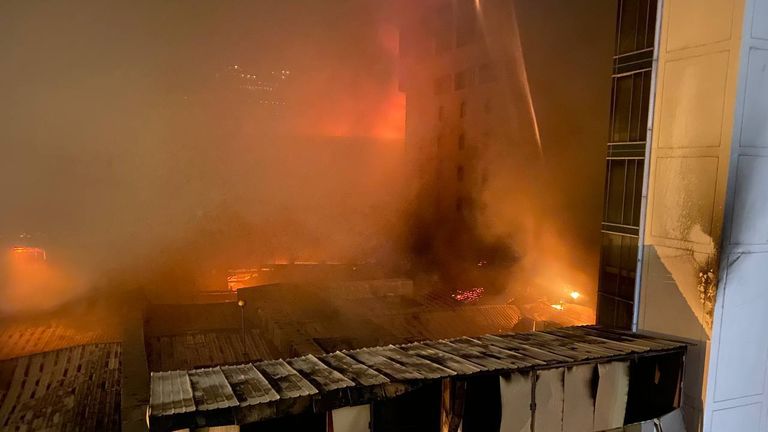 In a fire at a western Cambodian casino and hotel, seven people were killed and many more injured.

According to the General Commissariat for National Police, the fire at the Grand Diamond City Casino, Poipet, began at midnight on Wednesday.

Police stated that the fire was extinguished shortly after 4am UK Time (11am local time).

Parinya Phothisat the governor of Thailand’s Sa Kaeo Province said that one of the victims was a Thai national. 32 Thais were also being treated at hospital.

Fivety-three people have been injured, and eight others are missing.

Social media footage showed guests trapped in the building or hanging from windows. Keat Hol, the city governor, said that firefighters and other emergency workers were working to rescue them.

John Sagun is a worker at the Holiday Palace Hotel. It is also the Grand Diamond City Casino’s backbone.

Sky News reported that he initially believed that his hotel was on fire, but that a colleague told him that it was actually the Grand Diamond.

He stated that the fire seemed to have originated in the casino kitchen.

“At about 2:20 am, my boss instructed me to evacuate the staff. I then left the office to check out what had happened.

“I was surprised to see it burning when I was outside.”

He stated that at least two people died trying to escape the burning building.

According to Thai PBS, Cambodian authorities requested assistance from Thailand. Five fire trucks and 10 rescue vehicles were sent across the border.

Poipet, a city located in Banteay Meanchey Province, western Cambodia, is opposite Aranyaprathet in Thailand. Both are hubs for cross-border tourism and trade.