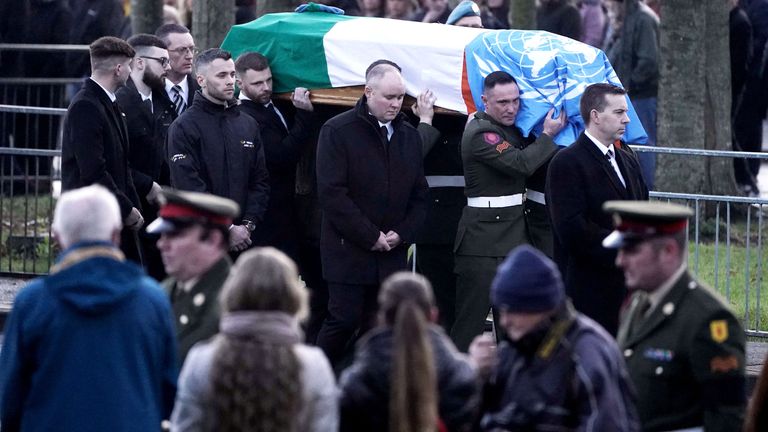 After the reported arrest of an Irish soldier in a peacekeeping mission, the United Nations said that it was “heartened” by Lebanese officials’ support.

Private Sean Rooney, 23, of Co Donegal was shot and killed by two armored vehicles that were carrying members of the 121st Infantry Battalion. They came under fire in Sidon, 30 miles south-east of Beirut on 14/12.

The UN declined to comment on reports of an arrest being made. They stated that there was an ongoing investigation into the tragic incident and therefore they can’t prevent its results. We need to protect the investigation’s outcome.

The incident was described as “deeply disturbing” by the police. It involved “peacekeepers, who travelled far to preserve stability in volatile environments and support the local population.”

The UN stated that they had asked for information and demanded the prosecution of the perpetrators.

“We ask people to refrain from sharing any harmful information. Disinformation can fuel violence.

“We need quick and effective investigations to locate those responsible and hold them responsible for their crimes.

“We are encouraged by the support from the Lebanese authorities, leaders from across all political spectrums, and we are hopeful we can get the truth.”

Three investigations into the incident are ongoing, so the Irish Defence Forces did not respond.

Father Derek Ryan, the priest, said that Private Rooney’s passing “really did pierce his heart” and the rest of the community in his homily.

He told the mourners, “It breaks our hearts when a loved ones dies while serving their country in the important work that is peacebuilding.”

“It breaks our hearts.”

Father Ryan also read from Holly, the soldier’s fiancée, a statement that stated that Sean was not only my other half but my better half as they grew closer.

She said, “I can tell for certain that he’d have been a fantastic husband” and “an even better father.”