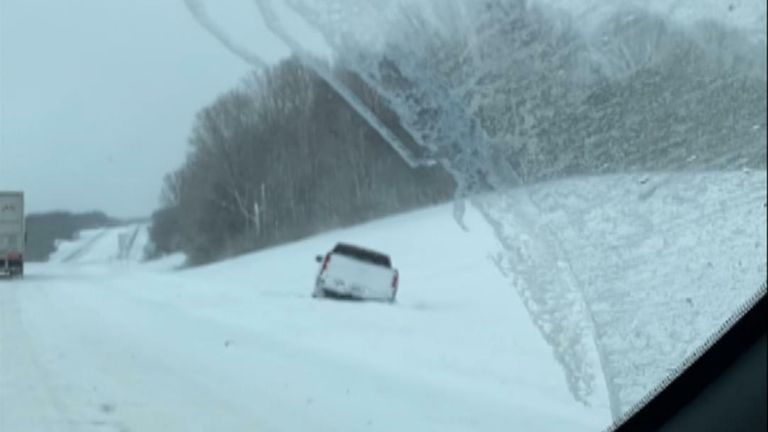 This is Watertown in New York. The town Christmas was almost forgotten.

After a seven-hour drive to Washington DC, we arrived at the border after only a few minutes.

Storm Elliott caught us by surprise.

Cars abandoned following the US snowstorm

Although our route was clear, we checked the radar. However, as Brits who have lived here for seven years, the weather in the US rarely behaves as expected.

We limped past abandoned trucks and power lines, pulled over police cars, in near-zero visibility. Finally, we reached the nearest town where we discovered one of those ubiquitous interstate-side chain hotel chains. The inn had enough room. ‘Room’… One.

It was ours. We, the children, and the dogs took it.

There were many power line workers in the lobby – some of them had driven from Texas (30-hour drive) – who were called to restore electricity to thousands of people without it.

One man told me that he had been on a pole, and it had snapped because of the freezing temperatures at -34C. He was thrown by a drift and had to be restrained for the rest of the day.

We were served food by the hotel, and our servers brought it to us with the grace of wearing Santa hats.

The group even tried a “holiday cocktail” with the leftover bar. It featured a cherry on top and plenty of ice.

The windows were battered by the blizzard. The blizzard outside made it difficult for our dogs to go out to pee, but they were able to walk back in just seconds, with their feet charred by the ice.

People shared their stories about where they came from and where they are going as we sat by the fire at the reception desk. I was shown a small, square-shaped box by a young man who was heading to his girlfriend’s house.

He suggested that it would be a New Years Eve proposal.

Four days and nights had passed since the hotel chef was on duty. They didn’t want him to go, in case they couldn’t find anyone to replace him. The upside? He said that there wasn’t much food left so it was difficult to prepare.

We settled down and stayed warm over night, unlike so many in the once-in-a generation storm.

Christmas morning is now here. My teens are still asleep, and although they are sad and confused, I am thankful that they aren’t as young as the little girl with the roller skates.

“Did Santa bring you those fabulous skates?” As she laughed, I asked the little girl.

She replied, “Yes!” “He knew that he had to deliver them here, not Auntie Pat’s.”

My mum and her mum exchanged a look only mothers of children at Christmas could understand.