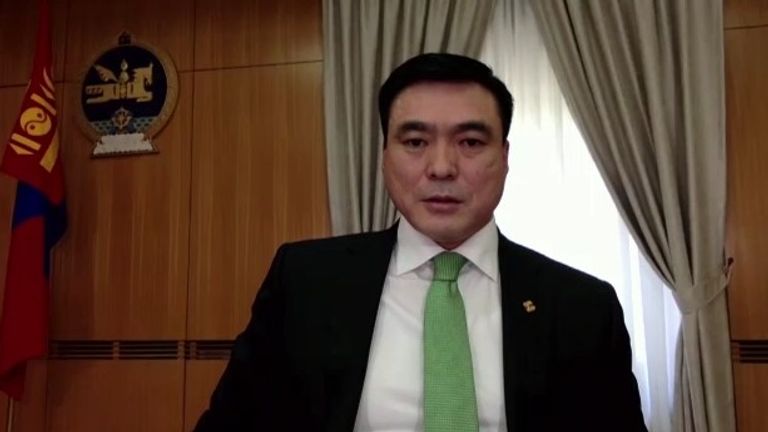 Mongolia’s deputy prime minister has spoken out in defense of Mongolia’s purchase of almost 100 percent of its gas from Russia. He stated that Mongolia’s position as a large landlocked nation presents many problems and challenges.

Exclusively speaking to Sky News, Sainbuyan Amarsaikhan stated that Russian sources are essential to ensure “continued supply at a reasonable price and timely delivery”. However, the country is keen to diversify its gas sector and economy “as soon as possible”.

He said that Mongolia was looking to Australia for “strengthening cooperation – bilaterally and multilateral”.

Mongolia is a large, landlocked country that lies between Russia and China.

It is dependent on its powerful neighbours for supplies and trade because of the logistical difficulties it faces due to its location, former Soviet outpost status and historical connections with China.

However, 2022 has seen this reliance become more apparent as the war in Ukraine along with China’s zero COVID policies have placed Mongolia in an untenable position.

Mongolia’s dependence means that it has been cautious about its approach to the Ukraine conflict. It abstained from the United Nations vote that condemned Russia’s invasion earlier in the year.

“Through our northern neighbour Russia, all our transport comes from Europe,” explained Mr Amdarsaikhan.

“Russia is our partner”

He made it clear that a country cannot stop the purchase of Russian natural gas. However, he insists: “We want to diversify the gas sector.

Amdarsaikhan also criticized western countries for spending “trillions” of dollars on wars, nuclear weapons and other inhuman acts around the globe, when there are other urgent priorities like helping poorer nations fight climate change.

He called for this spending to be “reconsidered” as he made it clear that a developing country like Mongolia can’t move away from coal mining, a major national industry, without international assistance.

He stated, “We need knowledge, experts and financial support.”

“Mongolia can’t do it alone. We cannot stop coal consumption and make use of it because it is the only resource this country has.”

“Those who used and consumed billions upon billions of pounds coal over the past century should help and support countries like Mongolia.”

Although Mongolia is a developing nation with many poor citizens, it does have significant mineral resources. It also has a large mining sector that grew rapidly in the 1990s after the country’s transition from a market democracy to a free one.

Around 25% of the country’s GDP is generated by mining minerals such as coal, copper, and gold.

This autumn, the COP27 climate summit reached an agreement to create a fund to help poorer countries deal with the “loss of damage” caused by climate catastrophes.

Mongolia is suffering from drought and desertification. Mr Amarsaikhan feels that help should be extended.

However, he was optimistic about the potential recovery of Mongolia’s economy. This has been under great strain due to the COVID-19 Pandemic and China’s zero COVID policies.

This policy has led to the closing of the border between the two countries, which has had an adverse effect on trade, as much of it is done by truck.

“It’s causing huge damage not just to our economy but to the entire society and it’s affecting all sectors in the country,” Mr Amarsaikhan stated.

He acknowledged that the recent protests in Ulaanbaatar, the capital, were partly caused by economic difficulties and inequality, as well as allegations of corruption in the mining sector.

He admitted that people have “lost trust and confidence” because of past mistakes.

He called the opening of the new railway connecting Mongolia and China a significant achievement that would help to rebuild exports and aid the economy.

He stated that if everything goes according to plan, it will take less than a year for our economy to be in a much, better state.