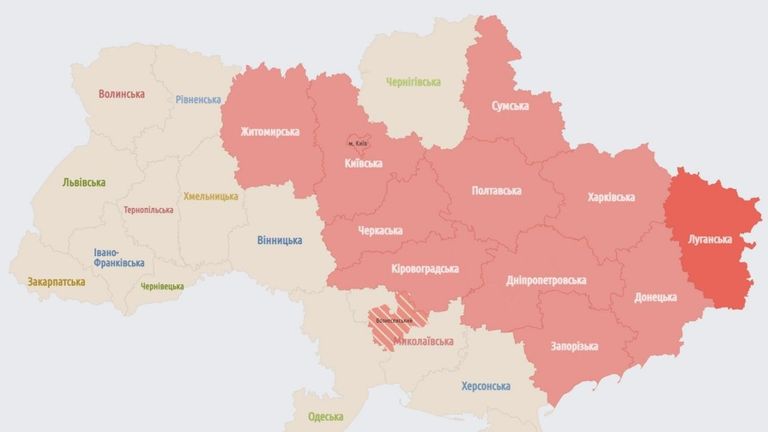 In the beginning, Ukrainians used their smartphones for alerts to other air raid warnings.

They’ve now switched to a suite of apps that track Russian missiles headed towards their country.

Russia has attacked Ukraine’s power grid since the beginning of the war with over 1,000 missiles. According to officials, the country’s power grid has been cut by as much as 50%.

Ilyas Verdiev, a Kyiv resident, explains why internet connectivity can sometimes be more sought after than heat and light for the besieged.

He explains that he experienced a blackout about a week and a half ago. “I didn’t have electricity,” the man said. But what’s more important is the fact that I didn’t have stable Internet access.

“That is a sign that I didn’t receive the information from different sources about the current situation.

Telegram is basically an instant messaging [app] that allows you to post any type of information to various ‘channels. There are a few channels that I use.

“One of these gives you information about when and how Russia’s air force is moving, whether they are bringing missiles or whether they have launched them. You can also post interceptions of Russian pilots

Russia launched yet another missile barrage on Kyiv on 5 December. Like many Kyiv residents Ilyas used apps to track the attack, from origin to execution.

Ilyas continued, “Today [5/12/12] they have warned in advance about this air raid being dangerous and there is an enormous take-off of their aircrafts which were bringing missiles on board.”

“The air raid map is another application. This is a map of Ukraine. Each region becomes red when an air raid is underway in that region. The air raid started in the eastern part of Ukraine. All of the areas from the east to the north, to the south and to the west were becoming redder. If an air raid is increasing and covers most of these regions, I will pack my stuff and get ready for the basement. It will eventually reach Kyiv.

“Simultaneously you can hear the siren outside your apartment and a notification that sounds exactly like the siren on your phone.

“I can make plans. I know how to act, what do, and where to go. I can tell my parents ahead of time – they should be prepared to go to the corridor, or to a safer location.