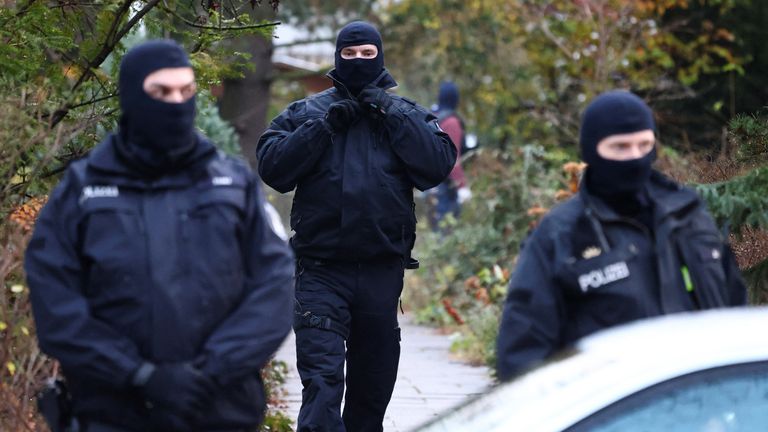 In Germany, around 3,000 police officers conducted raids to stop a plot by far-right terrorist groups to overthrow government officials.

Federal prosecutors stated that 25 suspected Reichsburger supporters and members were arrested during raids in 11 states of the country early Wednesday.

Twoty-two German citizens were arrested on suspicion of “membership of a terrorist organization”, while three other people, including a Russian citizen are suspected of supporting this group.

The Reichsburger movement is a coalition of far-right groups who want to overthrow the government and replace it by their own.

According to authorities, members of the group had been planning to carry out “actions based on their ideology” since November 2021.

According to reports, armed police stormed 100 properties in Baden-Wuerttemberg and Bavaria, Berlin and Hesse, Lower Saxony and Thuringia as well as the Austrian city of Kitzbuehel, and the Italian capital of Perugia.

One of the arrested was a 71-year old man who goes by Prince Heinrich XIII and is thought to have come from House Ruess, a long-standing German aristocratic line.

Prosecutors claimed that the group intended to make him Germany’s next leader.

Bild reports that he had spoken to Russian officials in order to negotiate a new order for the country. The group also chose who would lead various ministries in its new government.

Vitalia B., a Russian woman, allegedly assisted Prince Heinrich XIII in this endeavor.

Prosecutors stated that there was no evidence that the people contacted had responded positively to his request.

While the Russian Embassy in Berlin denied any links to the far right group, Dmitry Peskov, Kremlin spokesperson, said to reporters that “This appears to have been a German internal issue.”

He said, “There can’t be any question of any Russian interference.”

Prince Heinrich XIV Reuss, the current head of House of Reuss–Greiz, distanced himself earlier this year from his relative.

Interview with OTZ German News Site in August. He described himself as a confused old man who hadn’t been in touch with his family in 14 years.

Nancy Faese, the German interior minister, said that the raids were a sign that the country was “fighting back against democracy’s enemies”.

She wrote in a tweet: “The investigations offer us a glimpse into a terrorist threat by Reichsburger.

Analysis: Germany has shifted its focus to the extreme right.

The German security services have been focusing more on the far right in recent years. This increased focus has led to Wednesday’s arrests.

Recent events have highlighted the danger posed by far right. These include the murder of a local politician, and the attack on a synagogue in 2019.

According to the head of Germany’s domestic intelligence agency, the “Reichsburger” movement, which denies the existence a modern German state, presents a constant high level of risk following an increase in numbers.

Thomas Haldenwang stated in an emailed statement that he sent to Reuters, “Above all the propaganda surrounding an impending ‘Day X’ can generate considerable pressure in such clandestine group and ultimately be the trigger to serious acts of violence.”

Some have suggested that the group who were arrested for plotting a violent coup might not have been very competent.

Sara Nanni, a Green Party politician, said that “more details are coming to light which raise doubts as to whether these people were clever enough to plan an execution of such a coup.”

Experts cautioned against underestimating groups that were influenced by deep state conspiracy theories, such as QAnon and Reichsburger. Their followers were also involved with the 2021 storming of Capitol.

Professor Hajo Funke, a political scientist at the Free University of Berlin, explained that the public should be aware.

“There is no possibility that we face a similar threat to Washington on the 6th of January 2013. It is not true. Although things are managed, they [the groups] pose a threat in another dimension. They are dangerous because of their philosophies, their ideas, paranoiac thinking, and violent attacks on politicians and migrants, among others.

According to the state investigation, the suspected terrorist organization today was driven by conspiracy ideologies and violent overthrow fantasies.

“The next investigations will give a clear picture about how far the plans to overthrow have advanced.

“Militant Reichsburger have united their hatred for democracy, our state, and those who stand up to our community.

“That’s why we are taking actions against such endeavors with all the consequences under the law. This will be our continued hard line.

Der Spiegel reported that one of the raided locations was the KSK, a barracks unit of Germany’s special forces unit located in Calw, southwestern Germany.

In the past, some soldiers have accused the unit of being far-right.

Birgit M-W, a female judge, was also taken into custody during raids. According to prosecutors, she is believed to be linked with the extremist Alternative for Germany party.

The party is known by its German acronym AfD and has been under increasing scrutiny by German security agencies due to its links with extremists.