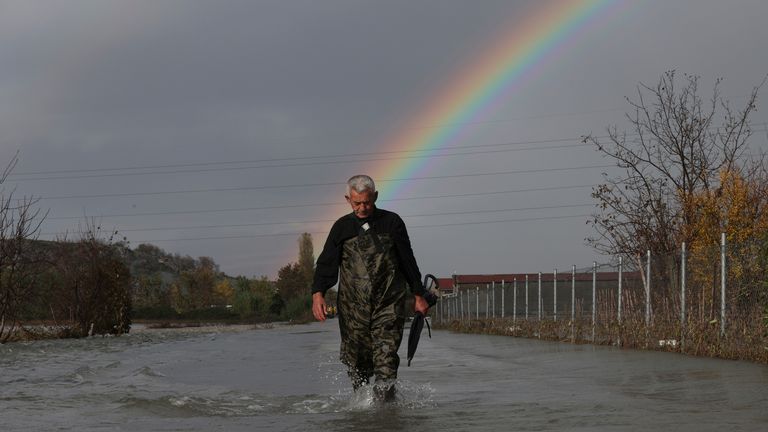 Authorities said that at least six people died in floods in the Balkans after torrential rains caused widespread evacuations and flooding.

North-west Albania was one of the worst affected areas, with thousands of acres of farmland and hundreds of homes flooded.

According to authorities, Sunday saw 400mm (14ins) of torrential rainfall in just 12 hours. This caused the Drini River (the longest river in Albania), to overflow its banks by at most 10 cm (four inches).

Two bodies of missing men were found early Monday morning. They are a father-son duo who lost their car on Sunday in Boge, 90 miles north from Tirana.

Four people were killed in flooding in Montenegro, Serbia and other parts over the weekend.

Montenegro: A car carrying a woman and her children plunged into the river while it was crossing a bridge.

Two-year-old boy fell into a river in southern Serbia and drowned.

The authorities in Raska, southern Serbia declared an emergency. The army was sent to assist with evacuations and delivery of drinking water.

At least 3,000 hectares (7.500 acres) of agricultural land were submerged in flood waters in the Shkoder-Lezhe districts, 60 miles north of Tirana.

After more than 600 homes had been flooded, hundreds of troops were deployed to help families.

Mayor Bardh Spahia stated that Shkoder is currently “isolated” from the rest.

Farmers who suffered repeatedly from flooding in the post-communist era raised concerns and requested government assistance.

Many people were rescued by helicopters in heavy rains in Australia

Flooding also occurred in the western Kosovo region, causing damage to buildings and school closings but no reported deaths.