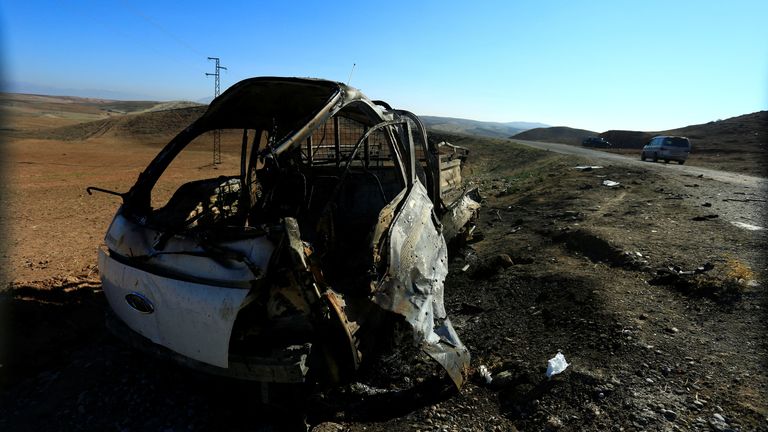 In retaliation to a bomb attack on Istanbul last week, Turkey struck Kurdish militant base.

The Kurdish-led Syrian Democratic Forces said that 11 civilians were killed in air strikes against bases in northern Syria, and northern Iraq.

Six people were murdered in the attack on central Istanbul . The SDF denies any involvement.

According to the Turkish ministry, the strikes have destroyed 89 targets.

Hulusi Akar (defense minister) insists that “only terrorists or structures belonging to terrorists were target” in Operation “Claw Sword and stated that all necessary precautions were taken to prevent civilians.

He said, “The claw of Turkish armed forces was once more on top of terrorists.”

According to the ministry, the strikes were directed at the bases of the Kurdistan Workers Party(PKK) as well as the Syrian Kurdish YPG (militia).

Turkey regards the PKK as a terrorist organization and the YPG which is the backbone for the SDF is a wing, according to the PKK.

According to the ministry, shelters, tunnels, and ammunition depots were destroyed in Qandil, Asos, Hakurk, and Cizire in Syria, as well as in Tal Rifat and Cizire in Iraq.

SDF stated that it would retaliate against the strikes and claimed that the strikes had caused destruction of infrastructure, including grain silos, power stations, and hospitals.

Farhad Shami (head of the SDF media center) tweeted that 11 civilians had been killed, including a journalist.

The attack on Istanbul that left 80 people injured last Sunday has not been claimed by any group.

The PKK claimed it wouldn’t “directly target civilians” but denied any responsibility.

Ankara was said to be planning to pursue targets in northern Syria earlier in the week by a Turkish official following a cross-border attack against PKK militants from Iraq.

Turkey has made three incursions into northern Syria so far against the YPG militia. President Tayyip Erdogan had previously stated that Turkey could launch another operation against them.

They are regularly involved in air strikes against northern Iraq.

Since 1984, the PKK, which both the US and EU consider terrorist organisations, has led an insurgency against Turkey’s state.

They want to create a separate Kurdish stage in southeast Turkey.

The US allied itself with the YPG to fight Islamic State in Syria. This caused a rift between NATO ally Turkey.