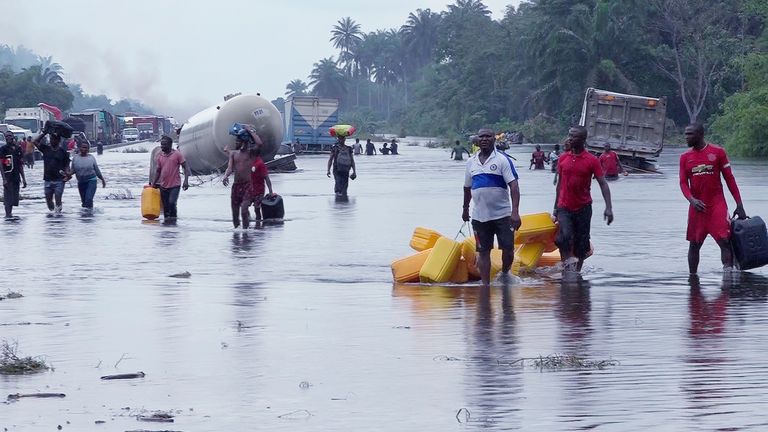 Nigeria was hit by the worst floods in a decade, with more than 600 deaths and a quarter of a million people displaced in October.


In addition to the destruction of hundreds of thousands homes, large swathes in the country’s agricultural land were also devastated by the rising waters. Sky News’s YousraElbagir visited the country in order to witness the challenges faced by the country after the deluge.

A field in Nigeria’s Benue State is illuminated by the sun.

Three children are sitting on mounds of rice husks that have gone to pieces, hunched over by their mother. Their mother is running grain with her baby in her arms, just a few feet away. After their farms had been washed away, the family combs through the rot to find any rice remnants they can make at home.

This is how life in the country’s food pantries looks. Unprecedented rains caused flooding that left over a million homeless and killed at least 6100 people. This is the worst flood Nigeria has experienced in more than a decade.

Although the country is used to seasonal flooding, this year was much worse. Nigerians now realize that flooding caused not only the loss of lives and homes but also the destruction of vast swathes land that was the best in the country.

Although the Benue River is now receding, the damage has already been done. Nearly 20,000,000 Nigerians now face food insecurity.

According to the Benue State Emergency Management Agency, it will take at most two more months before agricultural communities can be compensated.

Since clashes between farmers & herders began four years ago, the state services have been called overwhelmed.

Conflict has displaced at least 1.5 million people, and many more are in danger of being displaced by floods.

“This farm is available for lease. Jila Barnabas says that my ancestral home is now a no-go zone because of the attacks by the herdsmen on us.

His leased farm has become desolate.

He adds that “Thousands of hectares” of rice have been washed away.

The sign of hunger is in the farmer’s despair