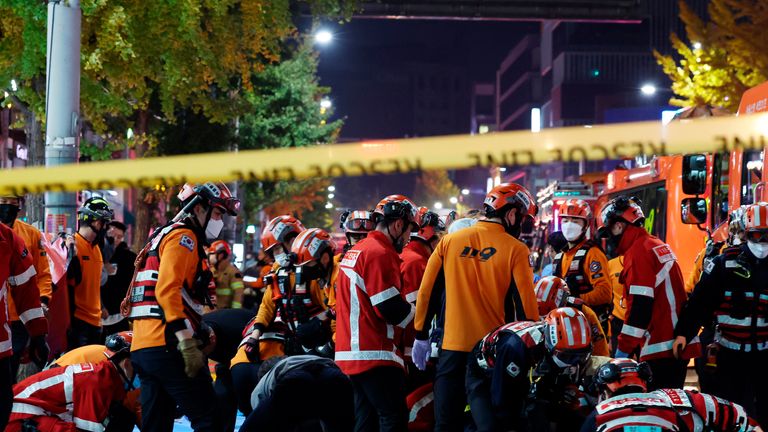 According to fire officials, at least 146 people were killed in a stampede that occurred in Seoul, South Korea.

During Halloween celebrations in the Itaewon, a large crowd pushed forward along a narrow street to crush the victims.

Social media footage showed that many victims were lying on the ground as CPR was performed by emergency workers and other passers-by to save their lives.

Choi Seongbeom, chief at Seoul’s Yongsan Fire Department, stated that the death toll could rise with 150 people being injured and a few of them in critical condition at hospital.

He said that most of the bodies were sent to hospitals and the rest were being taken to a nearby fitness center so they could be identified.

Over 800 emergency service personnel were sent to the streets to help the injured, which included all Seoul personnel.

Although it is unclear what caused the crowd surge, local media reports suggest that many people rushed to the area after hearing that a celebrity was there.

Seoul’s mayor Oh Sehoon was in Europe for a visit, but decided to come home after hearing the news.

In a statement, he stated that officials should provide prompt treatment to those who are injured and that safety at festivity sites should also be considered.

Local media reported that around 100,000 people traveled to Itaewon to celebrate Halloween, the largest in years after the removal of COVID-19 restrictions.