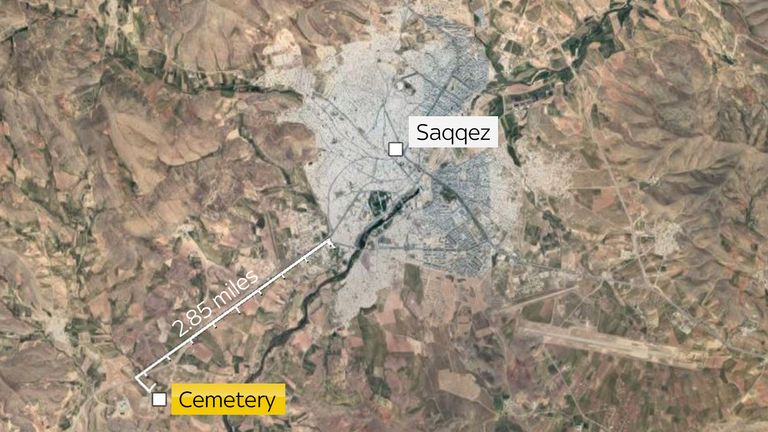 On Wednesday, Iran witnessed the end of forty days of protests. Demonstrators made it clear that they are still demanding change.

Tensions continued to escalate into Thursday with angry protesters leading to attacks against official buildings.

In this footage, Hengaw shows protesters breaking through the perimeter fence and then dispersing in a hailstorm of gunfire.

Although municipal offices have been attacked in the past during protests, it’s rare to see these demonstrations escalate on video.

It comes after mass protests in the country on Wednesday.

People flocked to Saqqez, a Kurdish city in Kurdistan, early in the morning.

It was Mahsa Amini’s hometown, and it is where she rests now. Her death caused unrest throughout the country.

To mark the 40-day anniversary of Mahsa’s death, huge crowds visited Mahsa’s grave. This is a significant milestone in Iran as it marks the end to the traditional mourning period.

The Iranian forces tried to dissuade people gathering at her grave. However, state-affiliated news reports denied the existence of a large security presence in the area.

It seems that the footage was shot on Madar Boulevard’s western end, near one of the main roads to Aichi Cemetery where protestors were heading.

The video shows a larger group of people wearing the same uniforms gathered at the junction, but it cuts off before we can see clearly.

Another online photo shows security forces gathering at Mydane Dayk Square on the other side of Madar Boulevard the evening before.

Despite all their efforts, thousands of Iranians arrived.

According to Iranian media, 8,000 people marched towards the cemetery. Anti-government sources claimed that 35,000 people from nearby cities and towns attended.

Although it is difficult to provide information on Iran’s ground, one online tool can give an indication of the number of people who traveled the 2.85-mile road from Saqqez up to the cemetery.

A 360-degree video of the crowd was captured from the bridge between Saqqez city’s entrance and the cemetery.

To create a panorama, we have combined stills from the video and created an image. This allows us to capture a quick view of the crowd as they return towards the city. It covers approximately 825m.

This image can be used to identify key markers such as the row of pylons that runs along the ground, and the point where the road curves around grassy verges.

These key markers were then placed on the map provided by mapchecker.com. This tool estimates crowd size.

Although they are very close, the people in this photo are not standing side by side. There are gaps, and there are cars. We calculated that there are 1.7 people per square metre using a site-provided guide.

Mapchecker.com estimates that there are 14,535 people in the photo.

We are not able to see beyond the video so it is possible that the real number of protestors is higher.

Although the protest at the funeral appeared to be calm, tensions rose when the march returned to the city.

The scene at Mydane Dayk Square is captured in a video that was recorded Wednesday afternoon.

A police shelter, which appears to have been set ablaze by protestors, emits smoke.

While protesters are watching, another fire is seen burning on the square.

The video is unclear as it is hard to identify the various groups. The sound of weapons being fired can still be heard at least once which suggests that security forces may be present.

Another online clip shows the chaos on the ground at Mydane Dayk Square.

Protests took place in the country on Day 40, including in Tehran, Sanandaj and Gorgan.