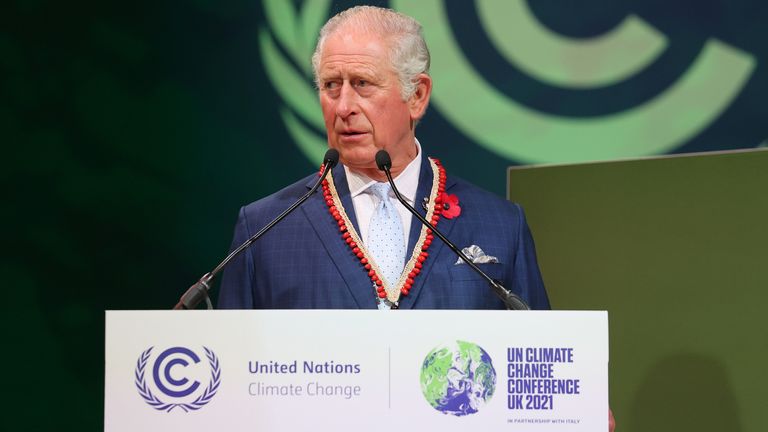 Egypt has urged Rishi Sunak, the new prime minister, to not abandon the UK’s leadership in climate issues just weeks before the UN COP Climate talks.

As Egypt prepares to host COP27 in November, their lead negotiator said that the UK had “[showed] leadership” in Glasgow, where it hosted the COP26 climate summit last year.

Ambassador Mohamed Nasr responded to Sky News’ question about the challenges facing the UK and other nations.

He stated that Egypt “still hopes” that King Charles will attend the Sharm El-Sheikh negotiations this year. The monarch, an environmentalist of long standing, pulled out earlier this month from the talks after consulting with Liz Truss, the then prime minister.

The diplomat stated that the invitation was “still there, and it’s an open invite.”

He has been a strong advocate for climate change action. He has been a role-model for… not only putting his political weight behind climate change discussions, but also for influencing and giving the right image of how royalty can push the climate agenda.

“So, we hope he will be there. We still hope he can make it to Sharm El-Sheikh.

While the diplomat avoided questions about whether President Joe Biden of the United States or China’s President Xi Jinping would attend the meeting, he said he hoped so, stating that “their cooperation, as well as their role in allowing progress on climate change, has always been instrumental”.

Ambassador Nasr stated that the UK is one of the leading countries in pledges of overseas aid to assist developing nations with climate change.

He said that he hoped “and we hope that this leadership position continues”, and he hoped for more cash to pay for the adaptation measures in those nations, which could include projects such as relocating coastal communities, or early warning systems for natural disasters.

He stated that climate finance pledges were “minimal” in comparison to the amount of money mobilised for the COVID-19 Pandemic or other causes.

The UK pledged PS11.6bn to climate finance last year over a 5-year period. The estimated cost of spending on pandemic response will be at least PS310bn.

According to Mr Nasr, the difficulty lies not in finding the money but rather in the “political will” and commitment to deliver the promised money.

Many MPs and aid organizations are worried that the UK is siphoning off funds to support housing for Ukrainian refugees.

Sarah Champion MP is chair of a committee that monitors aid spending. She raised concerns last week that the UK could cut its aid budget again to 0.3% of GNI (gross National Income) – after having cut it from 0.7% last year to 0.5% – as the PM seeks filling a PS40bn gap in the country’s finances.

Alok Sharma MP, however, retained his COP presidency position in the cabinet reshuffle, but lost his cabinet post, a reduction in seniority, just before COP27.

On Tuesday, Mr Sharma appeared before several parliamentary committees and stated that the government should “explain” and “prove” how new oil-and gas exploration is compatible with its climate commitments.

He was questioned by the MPs about the many controversial policies that he had supported, such as lifting the ban on fracking or issuing 100 new offshore oil and gas licenses. He denied that he supported fracking.