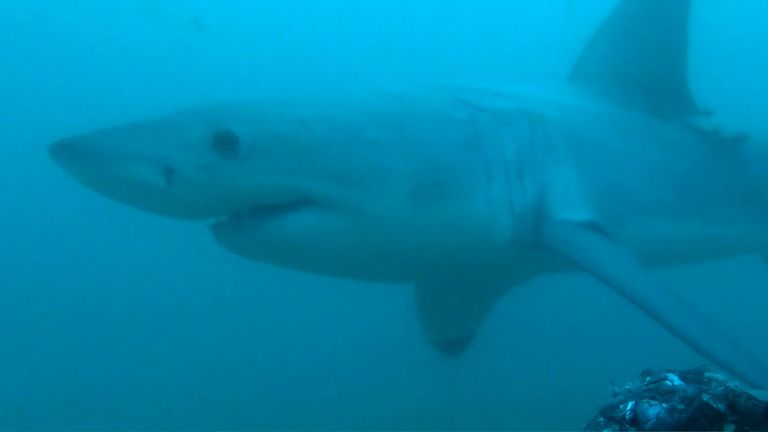 After a 1,100-mile journey, a battle-scarred great-white shark was captured on video. Scientists believe this discovery has “major implications for the study of this infamous species.”

The bite marks on the young male are likely from another shark and were seen off the coast Mozambique.

The deadly predator was identified by its facial scars, a tag and was captured on video using a special baited remote underwater camera (BRUV).

This big fish was matched with a shark sighting off Struisbaai South Africa in May 2022. It meant that this young great white had traveled 1,100 miles this year.

The Wildlife Conservation Society (WCS), and the Instituto Oceanografico de Mozambique, which are conducting surveys to assess shark-ray populations off the coasts of southern Africa, led the research.

Rhett Bennett was part of the BRUV survey in Mozambique. He stated: “This single observation has great value for shark science and conservation as it confirms a crossboundary movement on the scales of thousands of kilometres of a threatened species of shark, which has significant implications for the management.

“The individual ID match highlights another benefit of BRUVs and, specifically, video records as research tools for shark-ray science.”

Newsweek was informed by Mr Bennett that the shark’s marks were probably caused by a fight with another shark.

Great white Sharks can grow up to six metres in length and can live for over 70 years. They can also swim at speeds up to 16 mph.

Experts don’t believe the sharks are attempting to attack humans, even though they have been responsible for more human bites than any other shark.

Many scientists disagree and believe that misidentification is a common factor, especially in low-visibility areas.

Researchers confirm suspicions about sharks’ navigation in the oceans

The BRUV camera surveys’ findings will be used to inform South Africa’s fisheries managers and Mozambique’s resource managers about white shark migration and the need for multilateral, or at the very least bilateral management of this species and any other shark and ray species moving between these waters.

Alison Towner was part of the South African white shark tagging research. She said that this important ID match and confirmation for transboundary movement came at a crucial time when the Southern African white shark population faces the added threat of orca predation, in addition to other anthropogenic threats like shark nets.

It’s a wonderful example of collaboration between different research platform.”