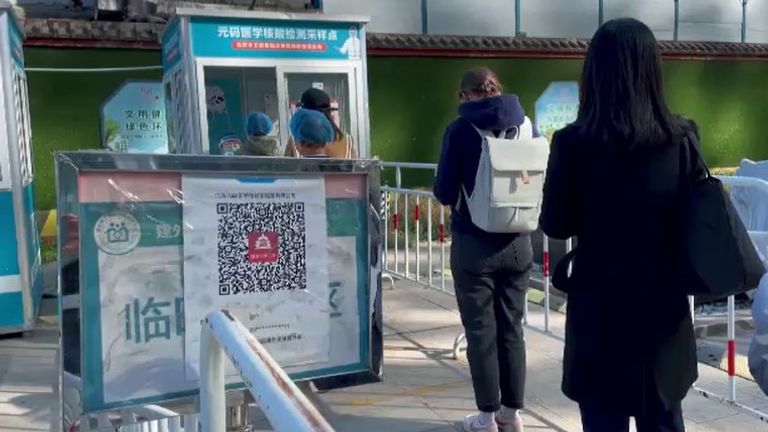 Even seemingly simple tasks can still be complicated in China.

It used to be very simple to catch a train from Shanghai or Beijing. This network of high-speed trains is amazing, and the two cities are very well connected.

However, times are not normal here and this journey is quite an undertaking.

This week we made the trip, arriving in Beijing at the 20th Party Congress. This is a once-in-five year political meeting that selects the country’s top leaders.

Congress has turbocharged the ‘Zero COVID’ agenda, which is a major reason why things are so complex.

Three separate apps required three ‘green codes’ to board a train in Shanghai. These required multiple tests, minimal contact and a lot of uncertainty.

The green codes are basically digitised proof that you don’t have COVID. We needed one each from the Shanghai authorities and one from Beijing authorities. A third so-called “green arrow” was also required.

However, testing negative does not always prove to be enough. Codes can change colour if someone is traveling from another province or district where there have been cases.

Travelling to Beijing was, in short, akin to trying to enter a digital fortress.

This is a snapshot of Zero COVID’s influence on the daily lives of ordinary people.

To be allowed to enter most shops, restaurants, parks, playgrounds, and even housing or office compounds, you will need a green code.

This means that people must have a COVID-19 test every 2-3 days. Testing centres can be found at street corners all over the city.

Chinese diplomat implicated in protests outside Manchester, according to MP

Although most people accept it as a given, there are some signs of frustration. One woman shared with me that she hasn’t been able visit her hometown in over a year and is too afraid she will have to quarantine her return home, disrupting her child’s education.

All the people I spoke with said that they would like to see things return to their original state.

Some places are experiencing a deterioration in tempers and a lack of patience. A group of people in lockdown in Shenzhen clashed violently with the authorities trying to enforce it a few weeks back. Rarely, graffiti has called for the end of the rules.

In a speech to open Congress, President Xi Jinping stated that the policy will continue for now. He says that saving lives must be the first priority.

To change the course of events, a victory narrative is necessary. There’s no evidence that one has been created.

Xi Jinping to tighten his grip on the Communist Party Congress


It is causing concern at all levels. The sudden and severe lockdowns have crippled the consumer economy, slowed economic growth, and caused record levels of youth unemployment.

These things can all lead to instability. This is the greatest fear of the Communist Party.

China is the only country on this path, with the exception of North Korea.

However, there are risks to doing so, and it is possible to slip through the cracks.