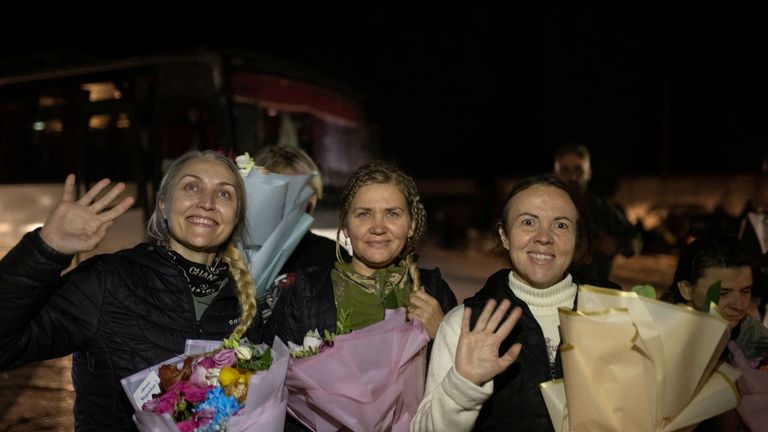 As part of what is believed to be the largest prisoner swap in the war, more than 100 Ukrainian women were freed from Russian captivity.

Denis Pushilin (head of Donetsk People’s Republic), stated that each side was supposed to release 110 prisoners, but his side released only 108 Ukrainians, as two wanted to remain in Russia.

Twelve of the Ukrainians were civilians while 37 had been captured in Russia by the Russian forces following the May fall of the Azovstal steelworks located in Mariupol.

Viktoria Obidina was one of them. She said that they had no idea they would be exchanging until the very last minute.

Mariupol had separated her from her daughter and she said that after Mariupol’s fall, “I will go see my daughter. I want to see her so badly.”

According to the Ukraine’s interior ministry, some of these women were held in prison since 2019, after being captured by pro-Moscow authorities from eastern regions such as Donetsk.

Volodymyr Zelenskyy, the Ukrainian President, spoke out about the prisoner swap. He said: “Among those freed today are those who were captured well before the full-scale war.”

“We don’t forget any of our people, we must return them all.” We will return all of them.”

He stated that Ukrainian women include officers, sergeants, and privates in the army, navy, territorial defense, border guards, and national guard.


He encouraged Ukrainians to accept more Russian prisoners in order to facilitate prisoner swaps in the future.

“The more Russian prisoners that we have, the faster we can free our heroes.” This should be a mantra for every Ukrainian soldier and commander on the frontline.

“I am grateful for all the people involved in this success. I also want to thank everyone who replenished our exchange fund and ensured that enemies were captured.