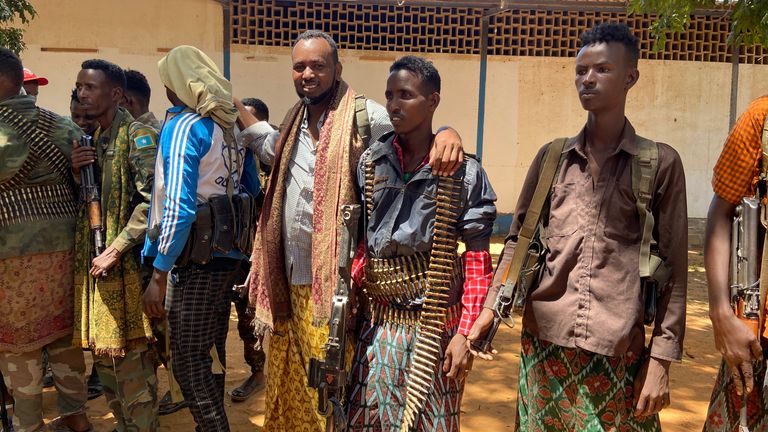 A ragtag unit of soldiers is gathered around a missile launcher deep in central Somalia’s Buloburde Bush.

They are huddled together, their ears pressing against a small black telephone. This allows them to receive intelligence which they then relay back to the troops positioned at the launcher.

Ma’awisley militia, made up of former farmers who are now fighters, is at the forefront of the fight for Somalia’s stability. It has become the weapon of choice in the 16 year effort to eliminate al Shabaab terrorist group.

This war does not have a front line. Al Shabaab has established themselves in various areas of the country and launches attacks from these territories.

These communities are now rising up against them.

“We are fighting to the right cause, the people, and for the faith until Somalia becomes peaceful,” Ali Shiri, Ma’awisley commander, says in Bal’ad, another hotspot located just an hour from the capital Mogadishu.

They protect their farms and families first. They are now losing their long-held lands to prolonged drought, and they are being stalked by al Shabaab fighters looking for food and money.

They are causing trouble in the community. They are farmers, and they keep coming back to us to collect taxes. Ali says that is why we fought.

The new administration is determined to end the insurgents. In May, President Hassan Sheikh Mohamud was elected and a 30-hour siege on the Hayat Hotel in Mogadishu, which ended with 20 deaths, took place. He declared war on al Shabaab in response to the massacre.

Two assassinations by al Shabaab have been sustained by President Mohamud. His nephew was also killed in the attack on his office in 2015. He is now in his second term and continues to fight al Shabaab.

Some of the most intense battles today are being fought in Hiraan, his hometown. His government is constantly recruiting farmers to fight the war, which is made possible by the harsh climate.

“We are facing the worst drought in Hiraan. “There has been no rain, and now we face an additional issue – war,” Ali Jeyte, governor of Hiraan, and an army veteran.

For the past four months, he has been fighting alongside Ma’awisley and said: “We are their leaders. We have told them what’s best for them and they accepted it.”

Ma’awisleys are named for the bright, wrap-around skirts that they wear to farm work. These same skirts are now covered in military fatigues and embellished with rows of state-supplied brass bullets. These skirts have rusty black-market weapons on their backs.

They are bolstered by ground support from Somali National Army (Somali National Army) and heavy artillery supplied by the African Transition Mission in Somalia(ATMIS), and engage in an aggressive offensive in the Battle of Hiraan.

Colonel Hassan Djama Farah, commander of ATMIS Djiboutian force, prepares his troops to launch the missiles by using their intelligence. They fire two missiles after the first strikes hit near the target.

The soldiers then pack their guns into their trucks, and the Ma’awisley blends back into the bushes.


“Bombs are their weapon choice” – they hurt soldiers and hit morale

According to the government, 200 al Shabaab militants were killed in the last few days. Many have also surrendered.

In a conflicted war, it is difficult to verify these numbers. Recent laws tightening restrictions on local reporting on the terrorist organization have been implemented by the government. Some of their social media accounts have also been suspended. Many Somali journalists claim that this is media censorship.

Al Shabaab’s tactics are constantly evolving in this changing climate.

Brigadier General Keith Katunji says, “We train on theirs, they train upon us.” He is the commander of ATMIS Ugandan troops, and has been stationed in Somalia intermittently since 2010.

Lower Shabelle is his sector, where Mogadishu lives and almost half the country’s inhabitants live.

Al Shabaab is a fan of bombs and improvised explosives (IEDs). He says that they know that we supply our bases via road so they focus on placing IEDs on roads and that psychologically affects us.”

His soldiers are affected by the injuries from the bombs, but they continue to work hard to clear a major road that links Mogadishu and central Somalia. This is a vital artery for fueling the country.

Every day, the Uganda People’s Defence Force finds between five and six improvised explosives on the 150-mile road. They search it inch by inch.

“The United Nations and government want to provide food so we must do this type of operation. The brigadier says that you must go to the area where food is being dumped and give hope.

Four failed rainy season have decimated food security in the country, and forecasts indicate that there will be little moisture to replenish the agricultural land.

Lower Shabelle is technically Somalia’s most fertile region. From above, once lush farms have been turned into drought-ravaged lands. Instead of fields of crops, they are now littered with planted bombs.

Nearly half of the country’s people are at risk from starvation, with just under 7 million of them.

The Ma’awisley are feeling angry, and not just because they are facing drought.

“When it’s harvest time, al Shabaab arrives and says we must pay – these were the challenges we face,” Ali Shiri, commander in Bal’ad (a city in Middle Shabelle) says.

Bal’ad is near al-Shabaab’s former capital Basra. There, the terror group would establish Sharia courts in order to settle land disputes.

Qaasim Furdug, Bal’ad’s mayor, considers this fight deeply personal. In a fight against al Shabaab, he lost his leg in Mogadishu in 2010. He insists that the war against them will continue.

Rural communities, once terrorized into silence, now face a fight.


“Either farm as free man or die, we are facing bullets”

Mayor Furdug says that people thought al Shabaab was on the right track, but they now realize that al Shabaab is the true enemy.

“So, everyone decided to farm as a free man. We are now facing bullets. We face our enemy.

As he leaves his office, the Mayor is met by Ma’awisley warriors. They take a break before returning to face al Shabaab.

These fighting rages across the country as Somalia’s government pushes for reclaim of territory.

“We cannot farm, and as farmers we are ready to defend land and people,” Abdi Mahmoud Hussein, a Ma’awisley fighter in Bal’ad.

Al Shabaab-controlled territory is home to at least half the estimated seven million Somalis who have been affected by drought. This curse, many believe, goes hand in hand with the drought.

Abdi says, “There is a shortage of rain and where al Shabaab is, drought follows.”