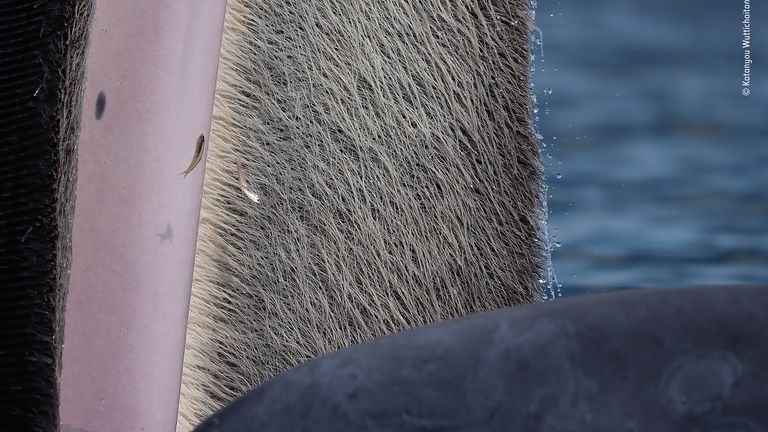 The Wildlife Photographer Of The year competition has named the winner.

Karine Aigner, an American photographer, was the fifth woman to receive the Grand Title award in the competition’s history of 58 years.

On Tuesday night, the Natural History Museum’s Wildlife Photographer of the year competition winners were announced at a ceremony in London.

The winning shot, entitled “The big buzz”, was taken at close-up at bee-level. It shows all but one male insect intent on mating with the female in the centre.

The contest organizers pointed out that the insects in the photo are endangered by climate change, habitat loss, pesticides, and climate change. They also have to contend with the effects of farming practices on their nesting areas.

Rosamund Kidman, writer and editor, was the chair of the jury.

“The bee-level magnification transforms tiny cactus bees to big competitors for one female and gives them a sense of movement and intensity.”

Katanyou Wuttichaitanakorn (16 years old) from Thailand was named Young Wildlife Photographer of the year 2022 for his imaginative image “The beauty of baleen”.

Organisers explained to Katanyou that when a Bryde’s whale landed close to the boat Katanyou was struck by the contrast colours and textures of its skin, pink gum, and the mass of baleen hanging from its top jaw, as well as the bristly-like mass of baleen.

The species uses a technique called lunge-feeding, which captures large quantities of small schooling fish. They then use the plates of baleen as filters to remove the smaller prey from the sea.

Ms. Kidman Cox said, “Out of the jaws a Bryde’s whale comes this dazzling invention.”

“The tiny anchovies are framed against a abstraction of colour by the weave of brown baleen hair, rimmed with a cascade water drops.”

Two Grand Title winners were selected from 19 category winners, which highlight the beauty and diversity of the natural world.

These were selected from 38,575 entries in 93 countries and will be anonymously judged by an international panel consisting of experts who evaluate their originality, narrative quality, technical excellence, and ethical practices.

These images will be on display at the Natural History Museum as part of the redesigned Wildlife Photographer of the year exhibition, which runs from 14 October to 14 December.

Here are the winners of individual awards, along with descriptions and categories.

Ekaterina Bee observes as two Alpine ibex fight for supremacy. Ekaterina saw the fight just as she was about to end her spring day trip with her family.

The two ibex fought horns, and they continued to fight while standing on their hind legs as boxers in a ring.

After centuries of hunting, less than 100 Alpine ibex remained in the mountains near the France-Italie border in the 1800s. Today, more than 50,000.


From the fog by Ismael Dominguez Gutierrez (Spanish – 11-14 years

Ismael Dominicuez Gutierrez shows a monochromatic scene in which an osprey waits for the fog to lift.

Ismael was disappointed that he couldn’t see beyond a few meters when he arrived at the wetland. He also had no chance of seeing the grebes he wanted.

The fog started to lift and revealed this amazing composition.

Daniel Mideros paints a moving portrait of a habitat that is disappearing and its inhabitants.

Daniel installed camera traps along a wildlife corridor that was used to reach high altitude plateaus.

He placed the cameras so that the landscape was disappearing, with the bear at the center of the image.

These bears are found in western Venezuela and Bolivia. Their habitat fragmentation has led to massive declines.

Jose arrived at the houbara courtship site at night. He dug himself a low cover by the light of the moon.

He was able to see the bird’s entire profile from this vantage point, as it took a short rest after its wild performance.

An impressive display by a Canary Islands houbara male is performed each year at its courtship site.

It will raise the plumes at the neck and throw its head back. Then it will race forward, before turning back.

Nick Kanakis gets a peek into the life of wrens

Nick saw the young, grey-breasted woodwren while he was out foraging. He knew it would disappear into forest if he approached it so he made a clearing of leaf litter and waited.

The little bird quickly hopped into the frame and pressed its ear against the ground to hear for small insects.

Other birds use this prey-detecting technique, such as the Eurasian blackbird.

Anand Nambiar captured an unusual view of a snow leopard charging a group of Himalayan Ibex towards a steep edge.

Anand viewed the snow leopard from a high vantage point in the ravine as it moved uphill towards the herd.

It was perfect for the environment, unlike Anand who had a training program to prepare for the cold and high altitude.

Fernando Constantino Martinez Belmar watches in darkness while a Yucatan Rat Snake snaps up a bat.

Fernando used a red light, to which both snakes and bats are less sensitive than the blue light Fernando used to keep an eye on the Yucatan rat snake that was peeking out from a crack.

Only seconds elapsed before the rat snake, which was accompanied by its bat prey, retreated to its crevice.

Salar de Uyuni, high in the Andes is the largest salt pan in the world. It also houses one of Bolivia’s largest lithium mines. This threatens the future for these flamingos.

Richard Robinson captures the hopeful moment of a whale population that has survived despite all odds.

Richard was unable to see the whales clearly so he used a polecam camera to capture them slowly moving towards his boat.

He pushed his camera to the limits in dark water and was relieved to see the image sharpening. The moment of copulation was crystallized in time.


The magic morels of AgorastosPapatsanis, Greece – Plants and Fungi

Agorastos Papatsanis creates a fairytale scene in the forest of Mount Olympus.

After waiting for the sun to shine through the trees, he used flashes and a wide-angle lens to highlight the labyrinthine forms of the morels.

Because they are hardy and can be difficult to grow, morels are considered gastronomic gems all over the globe. However, they do thrive naturally in certain forests.

Tony was faced with many challenges as the surrounding waters filled with sperm from spawning sea star sperm.

He was stuck in a tiny bay and had only a macro lens to photograph small subjects. He backed up to get the undulating star of the sea into his field of vision, creating a galaxy-like scene.

Dmitry Kokh shows this disturbing scene of polar bears encased in fog at the long-deserted settlement of Kolyuchin.

Dmitry and his partner explored each door and window, using a drone with low noise to capture a picture that conjures up an apocalyptic future.

The Chukchi Sea region is home to the normally single bears. They migrate northwards in the summer due to the retreating seaice that they depend upon for hunting seals.

Daniel Nunez captures the contrast between the forest growth and the algal growth of Lake Amatitlan with a drone.

Daniel took the photograph in order to raise awareness about the effects of contamination on Lake Amatitlan. The lake receives approximately 75,000 tonnes of waste each year from Guatemala City.

Brent Stirton presents the final chapter in the tale of a beloved mountain gorilla.

Brent captured Ndakasi as a 2-month-old rescuer after her troop was killed by a charcoal mafia.

As she lay dying, he remembered her as a rescuer and caretaker for 13 years, Andre Bauma.

The Cuban bullfinch is placed alongside a street so it gets used to the hustle and bustle of streets. This makes it less likely to get distracted during a competition.

They are prized for their sweet voices and fiery spirit.

Mateusz placed his remote camera on the reed bed mud and captured the moment when a passing falcon caused some dunlins up to fly up.

The seabed off Adelie Land is home to living towers of marine invertebrates. They are 32m (105ft) below East Antarctic ice.

In the middle, a tree-shaped sponge has been drenched with life.